Nothing says 'Season Greetings' like Santa wielding an axe

There's a point each December when the holidays get to be too much. You know that critical moment all too well. It usually involves Uncle Fred and too much eggnog.

This is when the customary hustle and bustle of shopping affixes a frozen smile of holiday cheer upon your face. This is the point where you just need to escape the insanity.

What better way to escape the Currier & Ives, syrupy-sweet setting than with a good horror flick? Let's explore some of the thrills and chills on the horizon this holiday season.

12/12/08
The Day the Earth Stood Still - Sure, it's not your traditional blood and guts splatter flick, but this sci-fi remake will give you plenty of goosebumps to help you deal with Aunt Stella and her Christmas carol-a-thon. And besides, it's got Keanu Reeves playing an emotionless alien, oh wait, he's not acting?

Late December
Amusement and The Lodger - Both of these movies are still showing up for limited releases before the end of the year, and we're really looking forward to the remake of Hitchcock's The Lodger, but we also know that they will be getting a DVD release in January and February respectively, so you might have better luck finding them on DVD than in theaters.

1/9/09
From Within and The Unborn - Now here are two movies more traditional to the horror genre. I will watch anything with Gary Oldman in it.

1/16/09
My Bloody Valentine 3D - You would think that they would time this remake to coincide with Valentine's Day, but that slot is pretty much owned by another genre pic. Instead, we get a little pre-Valentine's Day massacre action in this remake that is sort of, but not really, a sequel to the original 1981 film.

1/23/09
Donkey Punch - This thriller, more than true horror flick, is garnering a lot of attention and might be the breakout hit out of this group. With its largely unknown British cast and sunny setting, this might just be the cure for what ails your this holiday season.

1/30/09
The Uninvited - Asian horror remakes from Japan and now Korea have been solid box office performers and this one sould follow in its predecessors' footsteps. And besides it stars Elizabeth Banks who is on the verge of being over-exposed with as many films as she has been in lately.

2/13/09
Friday the 13th - And now you know why My Bloody Valentine 3D is avoiding its namesake holiday with a ten foot pole. This remake is a surefire hit that will spark the end of the Winter duldrums and the beginning of the killing season, all at the hands of the masked serial killer Jason Voorhees. 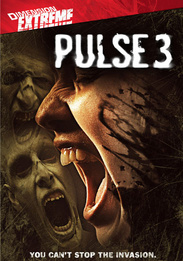 Pulse 3 - Nary a scant three months after the DVD release of its predecessor, Dimension is ramping up for a pre-Christmas bloodbath with this techno-cool cyber killer. Nothing says franchise ho-ho-ho like two sequels in the same quarter.

1/13/09
Mirrors - You've heard the saying, "if looks could kill," well these killing images are offing some of the better actors in Hollywood these days. If the return of 24 has you jonesing for more Kiefer Sutherland, then this movie will fit the bill.

1/20/09
Saw V - Every Halloween, they release a new theatrical installment and every winter that installment shows up on DVD like clockwork. This year is no different and for those of you that didn't rush out to see it in theaters, this week is for you.

2/17/09
Screamers: The Hunting - Perhaps it's my secret cultish enjoyment of the first movie about killing robots, but I can't wait to see this direct-to-video sequel. Sure, it's loosely ripping off all the Terminator movies, but I don't care.

February 2009
Feast III: The Happy Finish - Personally, I would've snickered a lot more had they used "Ending" instead of "Finish" but I digress. This little series of horror flicks that escaped as the last gasp from Ben Affleck and Matt Damon's failed Project Greenlight idea is probably making enough money for them to recoup all the production costs of the entire series. And it doesn't hurt that they are actually pretty decent either.

Can't wait for these to release to get your horror fix? Well then, try some of these holiday inspired horror hits from Christmases past.

Black Christmas - Before Margot Kidder was Mrs. Superman, she and her sorority sisters (why are only sororities hit by serial killers?) were battling an evil holiday killer. Odd trivia question. This film was directed by Bob Clark, who also directed a more traditional Christmas classic in A Christmas Story and the coming of age classic Porky's.

Black Christmas - I'm seeing a trend here. Actually, this remake is mostly forgettable, I mean the least they could have done was score a casting coup with Margot Kidder in the house mother role, but nooooo. Instead, the sorority sisters get naked and die, but it's nudie bait and switch as leads Michelle Trachtenberg and Lacey Chabert don't even take off their sorority sweaters.

Silent Night, Deadly Night - This is personally my favorite Christmas slasher flick as a demented orphan (again, all serial killers have parental issues, don't they?) dons a Santa costume and wields a heavy axe on a bevy of victims. And much like Christmas dinner, if one helping doesn't quite fill you up, there are no less than four sequels to keep your blood pumping and spilling this holiday season. 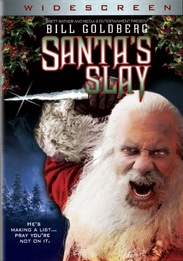 Santa's Slay - If you're a Lost fan then your obsession isn't complete until you've seen this horrorific turn by Emilie de Ravin, aka Claire, as this Aussie makes quite a memorable appearance in this "so bad it's actually good" campy horror flick. Once you get past ex-wrestler Bill Goldberg as the main baddie, the cameos actually make this a little seen gem that one should see before their own orphaned serial killer takes their life along with the rest of her sorority sisters.

P2 - I must confess that I love me some Rachel Nichols. And what's better than a crazy person chasing her around a parking garage on Christmas Eve? This topical holiday psychological thriller is a perfect yuletide appetizer.

The Thing & 30 Days of Night - These two honorable mentions make the list despite not being exactly Christmas-related, but they do feature a ton of the white stuff. And really snow and murder is all pretty much the same in the end, isn't it?