Sony Pictures has released the first poster for this fall's The Social Network. It's the story of Facebook's origins as adapted from the book "The Accidental Billionaires" by Ben Mezrich.

The poster features Jesse Eisenberg superimposed with the caption "You don't get to 500 million friends without making a few enemies." Eisenberg plays Facebook creator Mark Zuckerberg in the movie. 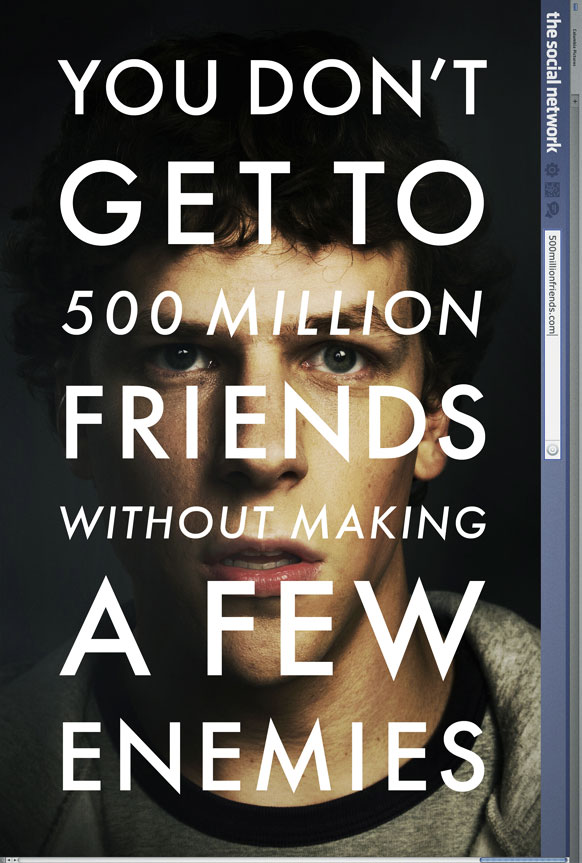 This film has the power to be a major cultural event and here's why.

Mezrich also wrote the bestseller "Bringing Down the House" which was adapted into the underrated movie 21 starring Kevin Spacey. Spacey is a producer on The Social Network. He hired one of the best pens in the business, Aaron Sorkin, to write the screenplay. Sorkin wrote A Few Good Men, Malice, The American President, TV's The West Wing, and Charlie Wilson's War. Hired to direct was the great David Fincher. You know Fincher, the man behind Seven, The Game, Panic Room, Zodiac, and The Curious Case of Benjamin Button.

Principals aside, remember the poster's caption: 500 million. That's how many people belong to Facebook. Those interested parties are potential filmgoers. Now consider the subtitle to Mezrich's book: "A tale of sex, money, genius and betrayal." Yeah, the story is scintillating but it also isn't pretty. From what I've been told, it paints Zuckerberg in very bad light.

If Facebook's recent privacy controversies couldn't change public opinion, there's a good chance this movie will. Could The Social Network be a watershed moment for this behemoth?

What do you think? Are you interested to see what plays out in The Social Network? Do you think it can change your attitude toward Facebook in a negative way? Let us know. We're dying to hear your thoughts.