New 'Machete' trailer is cool, but not legendary 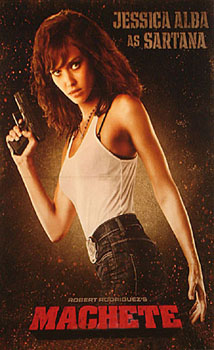 On Cinco De Mayo, Robert Rodriquez released a really cool, retro trailer that embodied the spirit of his grindhouse opus Machete. Now, a more traditional trailer showed up in theaters this weekend in front of Predators.

Thanks to IGN, you don't have to brave the megaplexes to see the new trailer. And I'll be honest, I was left a little wanting after watching it.

While it was nice to get new footage, and trust me I'm the last person to complain about gratuitous shots of Michelle Rodriguez or Jessica Alba in skimpy outfits, the trailer just didn't strike me the same way as the first one.

I understand this one is a more commercial trailer to try and bring in a bigger audience, but why not sell it on the nostalgia factor and let that work on its own. I don't know, to me, this trailer is the first hint that perhaps Machete could turn out to be a super dud.

I sure hope not, because I'm a huge Rodriquez fan and I've been looking forward to Machete ever since Grindhouse came out. What do you think of the new trailer?