Trailer Roundup: 'Cedar Rapids,' 'I Am Number Four,' and 'Your Highness' 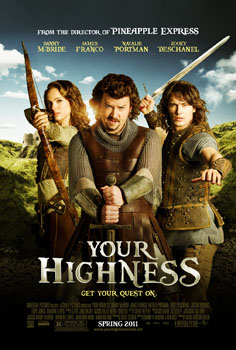 Ah, it's almost Christmas and what better way to celebrate the non-secular holiday of Festivus than with the latest trailer roundup? What's that? You've never heard of Festivus? Well then, allow me to offer this last minute Christmas gift suggestion to put on your list.

While the soup nazi might get all the glory, it's Festivus that is truly the lasting contribution to the pop culture parlance from this most excellent television series. So, let's all erect our aluminum poles and air our grievances while we prepare for tonight's feats of strength.

In the meantime, sit back and enjoy these exciting new trailers.

Bradley Cooper was arguably the breakout star from The Hangover, but the one person who was a bit overshadowed in that ensemble, but nonetheless hilarious is Ed Helms. In Cedar Rapids, we have his first starring follow-up to the blockbuster comedy and to say that Helms is keeping things close to the tried and true formula of his success would be an understatement.

Let's see, his character is taken out of his comfort zone with a trip to the "big city" where he gets beat up and mingles with a woman of the night. On second thought, the producers of Cedar Rapids might want to hire some extra lawyers for the inevitable lawsuits claiming plagiarism.

Well, it's not like there are any unique ideas left in Hollywood anyhow. The real star of Cedar Rapids is sure to be John C. Reilly who shines in yet another role that is tailor-made for his comic abilities. Take a look now, enjoy Cedar Rapids in theaters on February 11, 2011.

Do you know how I know that I'm old? I realized I was old when I stopped understanding the movies targeted towards the tweens of the world. And such is the case of I Am Number Four.

Below you will find the third trailer from this movie and while this one is an "entended look," I still have no clue what the heck this movie is all about. It looks as though the producers took all the interesting parts from Twilight, Harry Potter and The Last Airbender and put them into one movie produced by Michael Bay.

So, I suppose that I shouldn't be surprised when giant, genetically-correct robots show up at some point, eh? The one selling point to me is the inclusion of Teresa Palmer, of whom I am becoming a huge fan. Unfortunately, I don't think even she can save this bomb waiting to explode on February 18, 2011.

Finally, while James Franco and Natalie Portman are lauded this awards season for their stellar work in 127 Hours and Black Swan respectively, just wait until you see them team up in Your Highness on April 8, 2011.

While, the movie made waves a few weeks ago with a top-notch red band trailer that featured Portman in a g-string, the real selling point of this movie is the hilarious interaction between the excellent cast. Case in point, here's the safe for everyone green band trailer and now we can all revel in what is sure to be a great comedy in the coming year.

What do you think?