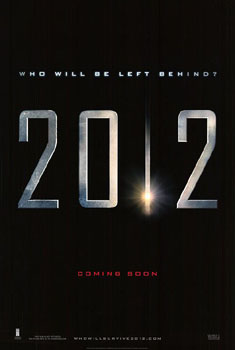 I'm a big fan of the game QRANK, which is an app on the iPhone and Facebook. Basically, it's a daily pop culture quiz in which you test your pop culture knowledge and put your score up against your friends and other players in your state and country.

Well, one of the questions this week asked which movie did NASA recently name as the worst example of science in a Sci-Fi film of all time. I took an educated guess and picked 2012, which turned out to be the correct answer. I decided then and there that I needed to track down the source and share the list with you.

It turns out that The Australian ran the piece in which they detail a meeting at NASA's Jet Propulsion Laboratory in California where they picked the best and worst examples of science in Science Fiction movies.

The film 2012 took top (bottom?) honors as the worst example of science, while they praised Gattaca as the most realistic use of science in a Sci-Fi flick. The complete lists follow.

WORST USE OF SCIENCE

BEST USE OF SCIENCE

What do you think of these lists? Which films did they forget to include?

NASA are not movie critics

Thanks to a hat tip from Mark Wilson over at About.com, we were made aware of some stout cyber sleuthing done by Dave Kellam where he was able to track down Donald Yeomans and get an answer as to NASA's involvement with this list.

According to an email to Dave Kellam from Yeomans NASA did not create these lists nor would they ever create such lists.

There is no list and there was no meeting to put together such a list. NASA would never put together a list of âworst sci-fi films.â We are not movie critics.

I strongly recommend reading the whole article here as Dave put a lot of work into trying to uncover the mystery behind these lists. The fact remains that the lists were most likely generated by The Sunday Times and went viral, duping just about every credible movie website on the Internet, including this one.

From our end, we do apologize for the erroneous report, but we are left to wonder why these lists would generate so much traffic and speculation. I believe it's because people would be interested to see what sort of list NASA would put together. I mean, they are the experts in the field of science and space, the lion's share of current Science Fiction work, and would most likely know a thing or two about Science Fact and Science Fiction.

Personally, I'd like to think that somewhere in NASA, some rocket scientists are sitting around a cafeteria table talking about movies and dissecting them for plausibility. Sort of like The Big Bang Theory. Movies are a common thread that brings us together.

Just like pit crews in NASCAR almost assuredly scoffed at Days of Thunder and Talladega Nights, I hope that somewhere in NASA there are rocket scientists playing amateur Siskel and Ebert, giving Science Fiction films a proper once over.