GBU: Daydreamin' about the Beastie Boys being full of Melancholia 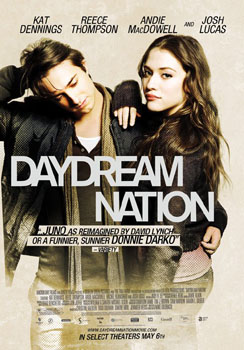 It's Friday and we're back with another helping of The Good, The Bad and The Ugly (GBU). This week we have two movie trailers and one other trailer that we're not really quite sure what it is, but we had to include it.

Words always get in the way of a good trailer and we're certainly not ones to make you wait unnecessarily for something that you want. Unless, they start paying us by the word.

When I saw Nick & Norah's Infinite Playlist, I immediately fell in love with Kat Dennings. She was a fresh, snarky voice amid the same old bottled-blonde, too-skinny actresses that have proliferated in Hollywood in the last decade.

Maybe she was too unique. Much like her co-star in her breakout hit, it seems that Kat has been typecast as the young, rebellious type. If she were a known commodity when they were casting Juno, Ellen Page would still be best known as a minor X-Men character.

In Daydream Nation, Kat is playing someone that is equal parts Juno and Angela Hayes from American Beauty. In fact, American Beauty is the first movie that popped into my head when I saw this trailer. If a 17 year old can have a mid-life crisis, then this movie would be it.

Again, we're back to treating bad as in bad ass. The only thing about this clip is that it's not technically a movie trailer.

Technically, I'm not even sure what it is.

The Beastie Boys released this two minute clip on YouTube in support of their new album which is dropping next month. They promise the new album and a "30 minute video" will be "coming soon."

So, this clip could be part of a music video for a song called "Fight for Your Right - Revisited" or it could be a whole other piece altogether. What is certain is that some of Hollywood's heaviest of heavy hitters are featured in the clip.

Here's a partial list that we compiled, can you spot any we missed?

And is it just me or is the world a better place when Will Ferrell is bringing more cowbell?

I'll admit it. I don't get what the big deal is about Lars Von Trier.

The film critic world has praised him as a visionary and blazing example of all that it possible in the medium of film, but I find his movies boring and needlessly dry.

So, here's the trailer for his next film Melancholia. To give you an idea about the absurdity of the subject matter, the movie follows the familial relationships around a wedding and the impending destruction of the planet Earth after a previously unknown planet (it was hiding behind the sun!) threatens to crash into it.

Yep, and you thought Antichrist was convoluted. I don't know maybe I'm in the minority on this one. Watch it and let us know, but I agree with my colleague Tim on this one. Any movie with Jack Bauer in it without terrorists is a waste of time.

Melancholia from Zentropa on Vimeo.