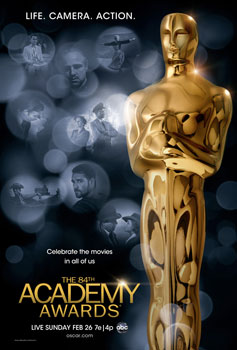 As is often the case at any awards show these days, the goings on around the show grabs the headlines more than the winners themselves. The 84th Academy Awards lived up to these expectations, almost usurping Uggie the dog's appearance at the Golden Globes.

Whether it was Ryan Seacrest getting dusted with Kim Jong-il's ashes thanks to a poorly executed publicity stunt by Sacha Baron Cohen for his new movie The Dictator or J. Lo's hotly contested wardrobe malfunction, it seemed like this year's Oscars were trying to be more like the MTV Movie Awards and less like the regal pinnacle of awards shows that it has become. Although, I think host's Billy Crystal kiss with George Clooney is a shoe-in for Best Kiss if they decide to continue down this road.

All of the circus (and Cirque) business aside, the awards themselves seemed to be as predictable as they have been in recent memory. Overall, The Artist and Hugo battled for supremacy all night trading Oscar win back and forth, before The Artist pulled away with several big wins for Best Director, Best Actor and Best Picture.

The one major upset of the evening was the Oscar's own Susan Lucci, Meryl Streep, taking home just her third Oscar in 17 nominations for her role in The Iron Lady. Streep bested odds on favorite Viola Davis from The Help.

Leading up to the Oscars, much was made about the composition of the Academy (predominantly old, white men) and while it would easy to cry racism after Octavia Spencer won the Oscar for Best Supporting Actress, I think it's much simpler than that. I think the real machinations behind the Oscars are two heavy-hitting brothers called Weinstein.

We all know how influential the Weinsteins are when it comes to the Oscars and the top prizes specifically. They do more campaigning than anyone else and they still have the power to influence the good old boys network that is the Academy of Motion Picture Arts and Sciences.

I think it's human nature to spread out the awards when there isn't one clear-cut frontrunner in order to honor the most films. The Academy wanted to honor Hugo, but knew that The Artist was going to take home a bunch of the bigger prizes so Hugo swept a bunch of the technical categories.

The other real surprise, at least for me, was Michel Hazanavicius besting Martin Scorsese for Best Director. Given the Scorsese drinking game and Hugo's success early in the show, I was convinced that he would take home his second Oscar.

All in all, the show was rather boring as host Billy Crystal never got much traction with his old schtick. In fact, his routine which was once the standard of excellence for awards shows looked as tired and old as the makeup of the Academy itself.

Dare I say that while Billy Crystal will always be the "safe" pick to host the Oscars, they need to look elsewhere moving forward, lest they become irrelevant in the awards season discussion. What do you think? How would you fix the Oscars?

Here are the winners from Sunday night's big Academy Awards. We'll post our recap here shortly. Plus, you can hear our post-Oscars podcast later on Monday.

Actor In A Leading Role

Actress In A Leading Role

Actor In A Supporting Role

Actress In A Supporting Role