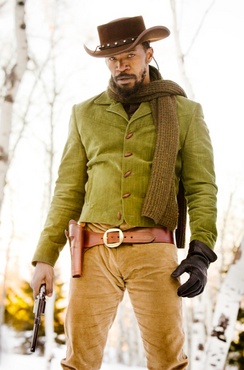 When I heard that Quentin Tarantino was going to make a western, I'm not going to lie, I got real giddy. In my head I had visions of his hyper-stylistic violence combined beautifully with the old spaghetti westerns that I grew up watching on TV.

You can imagine the anticipation then that was building up in me all day waiting for the Django Unchained trailer premiere. And did it live up to my incredibly high expectations?

Of course it did. When I saw that blood fly and land on the cotton or hear Johnny Cash's dulcet tones belt out "Ain't No Grave," I knew that this was everything I was hoping, but not expecting this movie to be. If you liked Inglourious Basterds and Kill Bill then you are in luck because this trailer plays like the bastard child of those two movies.

Django Unchained is a spaghetti western set in the South amid the backdrop of slavery and cotton plantations. While sure, it's not technically the Cowboys and Indians that I grew up on, I think it's safe to say that this vengeance tale will have plenty of Tarantino's signature violence and style.

But the best thing is that you don't have to take my word for it. Check it out for yourself below courtesy of Fandango, or is that FanDjango? Either way, I'm always down for a bounty hunter named Jango.

Django Unchained is due in theaters on Christmas day.

I have to say that for as awesome as the teaser trailer above was, Quentin has outdone himself with this International trailer. In my opinion, the trailer simply delivers more of his trademark style and explains the plot more succinctly.

I love the line "And you choose to dress that way on purpose?" That cracked me up. This trailer also seems to be a bit more bloody if possible and that's always a good thing.