'Pacific Rim' trailer is as good as advertised 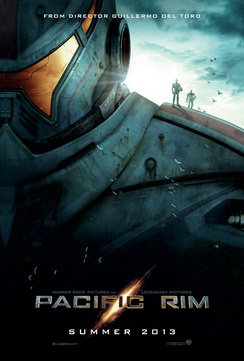 What do you get when you combine Godzilla and Independence Day with Real Steel? You get Pacific Rim of course.

The only thing stopping me from laughing and ripping this film a new one is the involvement of director Guillermo del Toro. Well that and the trailer that they released late last night is actually every bit of awesome that would think such a mash-up could be without any of the potential pitfalls.

If you are in need of a bit of an adrenaline kick, the watch the trailer below and you will get a boost to make it through the day, or to brave holiday shopping at the mall or to suffer through family celebrations that run out of alcohol way too early.

While the jury is still out in terms of whether it will be a huge hit or not, I think they kicked things off on the right foot. Of course, my colleague Tim's initial reaction was that he just wanted to play the video game.

Assuming that there will be a video game adaptation (seems like a no-brainer to me) that is, or he could have been lulled into the comparison by the voice of the A.I. in the trailer. It's GLaDOS from the Portal video games. Apparently, del Toro fell in love with her voice and decided to use it for his film.