A Viewer's Guide to the End of the World 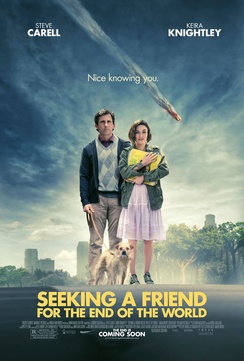 If you happen to subscribe to the Mayan calendar or harbor a fatalist mentality by choice, then this Friday is your big day. According to some conspiracy theorists and people who only eat at McDonald's when they bring back the McRib or the Monopoly game, the world will end on Friday at midnight.

That magical time is when the ancient Mayan Long Count Calendar finishes its 13th (and final) baktun. So, instead of winding the clock or turning over the baktun, some people would rather speculate that the world is going to end because the Mayans (who weren't shrewd enough to predict their own demise) ran out of stone tablets.

Naturally, it's a little more complicated than that, but not much. Basically, some people think the world is going to end on Friday, but most people simply see it as a good excuse to kick off the Christmas festivities a wee bit early.

We see it as the perfect excuse to create an "End of the World" primer/viewing guide. It's better than giving away all of your possessions and preparing for the apocalypse that has historically let us down time and time again. While you sit around and count down to midnight (although, I wonder which time zone the Mayans would consider the correct one?) throw in a few of these movies. At worst, you enjoy a little bit of themed viewing on an otherwise ho-hum Friday night. At best, you go out with a few laughs and potentially set yourself up as the long-dead messiah of some future civilization when they dig you up and realize that you predicted the whole thing because you happened to be watching 2012 when the world's light was snuffed out.

There are worst ways to start your little marathon than this little uplifting(?) film about a potential catastrophic event. I mean, it features a rock anthem from Aerosmith, so it has to be happy, right? Well, there are enough humorous moments to offset the dire consequences that will fall upon the planet if Bruce Willis and Ben Affleck can't save the day. Yeah, I'm thinking that if my very survival were at stake, I'd want to be a bit more choosy, wouldn't you? All of that aside, Armageddon is still a fun ride and holds up quite well.

1998 was the year of the asteroid impact films, but this is the one that actually followed through with that threat. At the time, death by massive tidal wave seemed silly, but after the tsunami in 2004, you find that you have greater respect for this film's ending. When compared to Armageddon, yes Deep Impact is painfully the weaker of the two, but hey, it's the end of the world, right? That and it has Morgan Freeman in it as the President of the United States. Oh look, with Barack Obama in the White House, it's like life imitating art, er wait a minute. Maybe the world is going to end on Friday.

Now that we've gotten a little of the ominous destruction out of the way, I'm sure you're wondering to yourself just what these Mayans were all about and what made them such the experts on world destruction. I'm sorry to say that you won't find any of those answers here, but you will get plenty of exposure to Mayan culture as the film is spoken completely in Mayan with English subtitles. If you haven't seen it, I don't want to give it away, but let's just say that the Mayans (or at least Mel Gibson) were big fans of avoiding horrible inevitable fates, so perhaps there is still time to avoid what awaits us at midnight. Probably not, though.

What starts out as a little innocuous little film with an interesting premise quickly spirals out of the realm of reality. Of course, do you really expect anything else from Nicolas Cage? This is another film that doesn't pull any punches when it comes to world destruction, but the end isn't really what this film is all about. Since it's the end of the world and all, let me save you some time. Turn the film off after 90 minutes and you'll be better off and save some precious time to you know, make a sandwich or take a potty break. Just because it's the end of the world is no excuse to die hungry or with a full bladder.

After you've eaten and gone to the bathroom, settle in for this epic tale of foreboding loss and love prevailing above all else, even in the face of certain destruction. Well, at least that's what I get from the trailer. I'll be honest, I haven't seen this film yet and with time running out on us, I'll have to squeeze it in, quite literally, before the clock strikes midnight. But, it's a Lars Von Trier film and I'm pretty sure that if there is a great beyond after our end on Friday night, one of the requirements will be having seen all of Lars Von Trier's films. At least, that's what his devotees claim. It's close to the end, might as well hedge all of my bets, eh?

Now, if Universal was truly progressive in their marketing department, they would have held this film back from DVD and Blu-ray until Friday. I mean seriously, who wouldn't buy this film if it would have been released on the very day that the world is supposed to end? I mean this film would have been the center piece and any respectable End of the World party. It would have set single day sales records, but you know since the world would be gone by Saturday, Universal wouldn't have profited much for being cool (and right). Alas, this film didn't draft all the real apocalypse, but it still makes for a fine watch as the day grows long. The end is only a few hours away, so I'm sure we'll want to laugh about it a bit. Either that or we'll be so drunk that it won't matter.

Does anyone know what really happens at the end? You know after Seann William Scott clasps hands with his evil twin and their truck starts floating up into the sky and wormholes start appearing? Does it matter? I mean the end of the world is upon us, right? All I know is that by this point you'll be looking for something so messed up that it will make you forget about the impending apocalypse. This movie is just what you need. Besides, if I'm going out of this world, I'm going out with Kevin Smith on the screen. Besides, I think that the only thing that's going to happen on Friday night is that it will be followed by a Saturday morning with a lot of hung over, disappointed people. Since you won't remember much about the night before, you might as well end with this little mind-bending number.
© 1996-2022 MyVideoStore.com, Inc.
Version 6.1