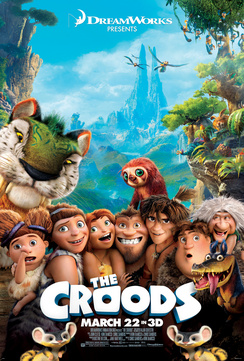 I am really making an effort to make that second M count this morning, but after being off late last week and a meeting coming up this morning, I have a feeling that I might disappoint my fans. Wait, do I actually have any fans?

My shattered ego aside, Tim rightfully pointed out that we might have to come up with a different name for this column if I'm unable to get it out first thing on Monday, but I told him that I could do it. Of course, this week notwithstanding.

Speaking of this week, the box office presented us with more than a couple of surprises which is always good this time of year. Given the strong competition from an intriguing first weekend of March Madness, I guess you could say that the weekend was win-win all around, especially for those who attend Florida Gulf Coast University.

This one was really a no-brainer. Animated family films tend to do really well right around Easter and The Croods was precisely what the box office needed. A bit reminiscent of Ice Age but with cave men, The Croods struck that perfect balance of goofy animated fun with just the right touch of adventure thrown in for good measure.

The Croods debuted in first place with an estimated $44.7 million. It seems that Dreamworks is on to something with animated films as the opening comes smack dab in the middle of How to Train Your Dragon's $43.7 million and Megamind's $46 million.

With little in the way of family entertainment in the next few weeks, we fully expect that The Croods will end its run just over $150 million. I haven't seen the film, but I can't imagine that anyone would make an animated film these days without built-in sequel potential, so it's pretty safe to assume that this won't be the last time we see The Croods.

Speaking of sparkling openings, Olympus Has Fallen came out of nowhere to grab over $30 million at the box office. A good $5 million more than the most rosiest of predictions would have allowed.

I'm not as surprised by the performance of Olympus Has Fallen because the film itself looks compelling and interesting. No, what surprises me is that this film wasn't even on my radar six weeks ago and now, here it is scoring a very respectable second place finish.

It's as if they deliberately chose to create a blitz attack and get everyone really excited real quick. I believe the first time I saw the trailer was only maybe a month ago and my first thought was 'man, this looks like a pretty kick-ass little film.' My second thought was, 'why haven't I heard of this film before now?'

I think with certain films, the "blitz attack" in marketing and advertising works because there's sometimes too much noise and chaos out there in the market as it is. This is especially true during the Summer months, so it makes some sense to attack with a sharp point over many dull blades.

Awkward metaphor aside, it is a risky strategy as you put all of your eggs into such a small basket that you could potentially miss your target audience altogether. Of course, with social media being what it is and studios finally starting to get it, the likelihood of a miss goes down drastically.

Olympus Has Fallen would qualify as the first surprise hit of 2013 when its final tally maxes out just over $100 million. Surprise is good because while the business was good this weekend, it was no match for last year's massive The Hunger Games and its $152 million opening weekend. Still, the robust results against a strong first weekend of March Madness (up 5% over last year's viewership) is a pretty good indicator that 2013 has finally shaken its early box office blues.

Other new films included a disappointing performance by Admission. With Tina Fey and Paul Rudd carrying the film, you would expect more than its paltry $6.4 million opening. Expanding out to just over 1,000 screens, Spring Breakers made $5 million and looks to limp to $10 million, which would be considered a huge victory for this small film.

I have to admit that I never really got into Pitch Black or any of the resulting Riddick films, but the concept always intrigued me. A man with glowing eyes that can see in the dark, which you know comes in handy when you crash land on a planet that is plunged into perpetual night.

I just never really had the time or inclination to make it a priority and I suppose a lot of that stems from my lukewarm feelings of star Vin Diesel. I just didn't see the need to ever sit down and commit to the films.

Today, they released the teaser for September's Riddick and I have to say that visually, it looks stunning. Knowing absolutely nothing about the film series, I am a bit intrigued by the whole "don't take my chains off" declaration.

But again, I'm not sure if this is enough to get me to sit down and watch the films. What do you think?

Did we just find a use for Vine?

I haven't really gotten behind Vine, because I really didn't see the point. It's sort of mash-up of YouTube and animated gifs.

I mean sure, it's entertaining and with Twitter behind it, things are pretty much guaranteed to work out, but I never really saw much of a real world application for the site. That is, until today.

The Wolverine director James Mangold tweeted out the following Vine video that he's calling a "tweaser," which is a fancy new word for a teaser of the teaser trailer. The Vine video is all of 7 seconds long, but it's pretty packed with Hugh Jackman goodness and a few "Snikts" thrown in.

Well, I think I will end it on that note. I hope you all have a great week. Until next week, mix well.