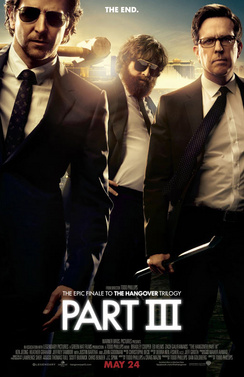 Much like The Hangover Part II, this trailer for The Hangover Part III may do more harm than good. We thought it was a bit odd that Warner Bros. didn't release anything for this movie until they debuted the first trailer last month, but now it's starting to make a bit of sense.

While I definitely plan on watching this movie and completing the "Wolfpack trilogy," I think it's painfully obvious that this franchise has run out of gas. The latest trailer gives away basically the entire plot which really was pretty unnecessary, no?

It's not like we go to see these films for their intricate plot twists. We learn why yet again Doug is left out of their adventures and we see that the film is going to once again revolve around Ken Jeong's Chow character.

Didn't we already find out from the last film that we find a Chow storyline less filling than one that is solely about the Wolfpack? I guess not. Don't get me wrong, it seems that the swan song is going to touch upon every character, even that cute baby in sunglasses from the original film.

The Hangover Part III hits theaters on May 24. Consider us a wee bit unimpressed with this trailer.