'Ender's Game' trailer is literally out of this world 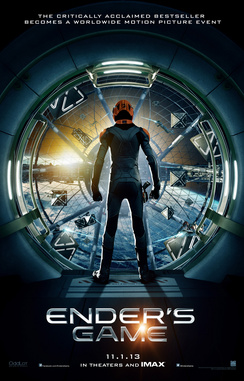 So, you might want to take a crash course in all things Ender's Game.

I'll admit, I was clueless about this movie until we did research for this year's top box office feature and Tim was so bullish on this title. I hadn't heard of it until then, but after a bit of reading, I was convinced that yeah, it's probably going to be one of the year's biggest films.

It's got Han Solo in a new war in the stars.

It's got the Mandarin with a hair cut.

It's True Grit in space.

It's also got Bigger Miss Sunshine.

This is what I know. After suffering through a couple of devastating attacks from alien invaders, Earth's survivors train specially selected kids to be their last ditch, "out-of-the-box" commanders for the last battle.

So yeah, if you liked Star Trek Into Darkness, Pacific Rim, Moon, Elysium or any of a number of hard-core Sci-Fi films that suddenly Hollywood can't get enough of, then Ender's Game is for you.

The first trailer is below and it looks like a cross between Starship Troopers and The Last Starfighter. In other words, I'm in.

Ender's Game will have to battle more than aliens as it will be up against Catching Fire in November when it debuts in theaters on November 1.