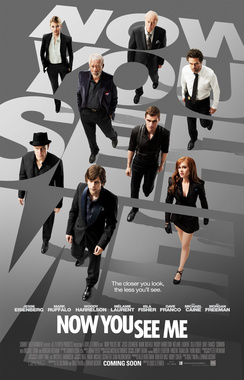 What's that old saying? It's good to be back? Well, it still rings true, although it feels a little weird slipping into my Monday Morning boxer shorts this morning after such a long layoff.

But I'm a professional and I will soldier on. I do want to thank Tim for graciously volunteering to take on MMM duties in my absence. I think he did a wonderful job and if we ask him nicely, perhaps he'll help us out again later this Summer when I'm out changing newborn diapers in August.

Last week, we were off celebrating the Memorial Day holiday, but I did sort of sneak in a bit of a TMM here where I tried to come to grips with the inexplicable success of Fast & Furious 6. I guess you could call that my warm-up piece for today. I'm sure there will be some pains as I get back in the swing of things, so please bear with me.

As always, my goal is to make your Monday mornings (or more accurately afternoons) more enjoyable with a look at the past weekend's news and celebrity hijinks. As always, Hollywood did not disappoint, so let's dive right in. Get comfy and enjoy!

Not even Morgan Freeman falling asleep during a TV interview could derail the success of Now You See Me. Yes, I realize that it only placed second with its paltry $28.1 million, but for a film that was tracking to only bring in $20 million on the high end of projections, this is a real win.

Of course, the magician-heist film's biggest trick might end up being able to make Will Smith's career disappear. The highly publicized and marketed After Earth, co-starring Smith's son Jaden fell well below expectations and finished in third place with only $27 million. To give you an idea of how bad of an opening this is for Will Smith, consider that it is his 12th highest opening of his career, right behind classic bomb Wild Wild West.

Perhaps it was the whole concept of the vanity project that turned off potential audience members or director M. Night Shyamalan's involvement. Believe it or not, After Earth opened at about $3 million less than The Happening. Despite strong Sci-Fi entries of late, After Earth will struggle to hit The Happening's $64.5 million total box office gross.

Tim and I talked a bunch earlier this year as to which film would be this year's Battleship or John Carter and while we thought for sure it would either be The Lone Ranger or Man of Steel, it looks like After Earth took some pressure off those films. A few months removed from those discussions, I still think The Lone Ranger could be in a bit of trouble, but Man of Steel has solidly played its way off of stinker status in my opinion. Perhaps, Tim and I will post our discussion for 2014 bombs as part of our annual predictions in January next year.

Now You See Me continues a recent string of solid hits for magician themed dramas. We need that caveat after the less than enthusiastic response give to The Incredible Burt Wonderstone earlier this year. Now You See Me joins The Illusionist and The Prestige in the magicians box office success club and should out-earn both of those films ending with just north of $75 million.

Fast & Furious 6 saw a big drop in its second outing as expected, but still took in enough ($34.5 million) to remain in first place. With over $170 million in just 10 days, it looks to be a lock to become the highest grossing film in the franchise, besting its predecessor's $209 million. It will most likely end up shy of $250 million though.

Other odds and ends: Epic is an epic failure and will struggle to surpass $100 million, especially after Monsters University opens up in a couple of weeks. Speaking of failures, The Hangover Part III is on life support and will actually struggle to make half of the box office bank as its first two films. Phasers are set to stun for Star Trek Into Darkness which is looking to end up with just less than the first film's $257 million.

Looking ahead to this weekend, Vince Vaughn and Owen Wilson look to rekindle their bromance in The Internship; which actually looks pretty funny. Will it even approach their numbers from Wedding Crashers?

According to Us Weekly, Channing Tatum and Jenna Dewan welcomed a daughter into the world on May 30. The young tike instantly joins Hollywood royalty and is pretty much assured good looks.

The child was born in London; which is in the midst of their own royal baby hysteria as they await Prince William and Kate Middleton's first baby in July. Given that Prince Harry may have already spilled the beans on the royal baby's sex, perhaps there will be a Hollywood royalty and real royalty wedding some day. Who knows?

Greed is good, oral sex is not

I think doctors might disagree with that statement, but what do I know? Michael Douglas took a more convention route with chemotherapy for two months and he's now been cancer free for over two years. I guess we now know why Catherine Zeta-Jones is always smiling.

I think it's best to end right there. On a high note as it were. Until next week, mix well.