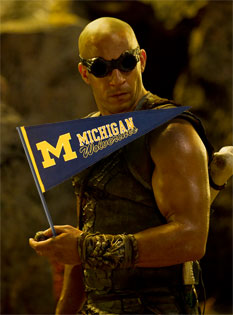 Did you have a good weekend? The NFL got back to regular season action and college football really got going so it was a good weekend for me. Not only that but my favorite teams (Colts, Michigan, and whoever is playing Notre Dame) all won despite a few ugly plays. Well, technically I only had two favorite teams this weekend as the aforementioned two and three were one in the sameâand that made the victory even more sweet.

Sports entertainment aside, there wasn't a ton of movie news over the weekend. At the box office, the third film in the Riddick sci-fi series, appropriately titled Riddick, came in at number one. It pulled in a solid $18.7 million. Meanwhile, Lee Daniels' The Butler served up another second place finish with $8.9 million. Most surprisingly, the Spanish language comedy Instructions Not Included came in third with $8.1 million, up from fifth place last weekend. I bet Hollywood producers are keeping star and director Eugenio Derbez's phone ringing with English language projects.

In theaters this weekend is the sequel to 2011's Insidious, again the appropriately titled Insidious Chapter 2. Also new is the mob witness protection comedy The Family starring Robert De Niro and Michelle Pfeiffer.

We don't typically mention small screen fare here on the MMM but tis the fall premiere season. This week has favorite shows Sons of Anarchy (Tuesday on FX) and Haven (Friday on Syfy) returning. The new shows really get going the third week of September. I can't wait for Marvel's Agents of S.H.I.E.L.D. on the 24th. Coulson lives!

Celebrity news also doesn't usually make it into the MMM but this bit deserved it. Sir Patrick Stewart confirmed over the weekend that he married his girlfriend Sunny Ozell. Stewart announced it on Twitter along with an unlikely photo of him and his bride. Sir Patrick's friend, co-star, and fellow Knight of the British Crown Sir Ian McKellen officiated. That's right, Magneto served as minister at the wedding of Charles Xavier. McKellen showed off his Doctor of Divinity certificate in a photo on Facebook.

This ends my three-week run as your replacement MMM host. Your regular guide John will be back a week from today. It's been a fun trip. I hope you found it enjoyable as well.

Oh yeah, I kept teasing a change-up for one of these MMM installments. Well, obviously I stayed true to the weekend recap template here. I've decided to take my idea to its own, stand-alone article on the site. As I alluded to on Facebook, it's all about quoting lines of movie dialogue in our everyday lives. You can expect it here in just a few more days. I really and truly promise it this time, 102.4% positive. Update: Read it here!

Until John's return next Monday and until my next fill-in, mix well!