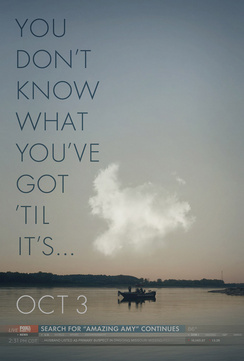 Ben Affleck is a polarizing figure. You either love him or hate him. There's really no middle ground.

David Fincher is not. He is almost universally praised for his artistic vision and ability for making compelling and dark films.

The Girl with the Dragon Tattoo

I rest my case.

Interestingly, the subject matter of his next film is also hotly debated. Gillian Flynn's Gone Girl is either adored or loathed depending on whom you talk to. But there's no debate about the tone of the book. It's dark, it's bleak, it will make you physically disgusted to be a human being when you finish reading it.

Of course, it's this quality and lack of a single likable, redeeming character that makes this story so hard to envision up on the big screen. And yet, in the right hands, this story has the potential to win many awards. David Fincher, without a doubt, is the man who you want to be sitting in the director's chair for this story.

Of course, the story has changed. Flynn not only penned the novel, but also came up with a new ending that Affleck has been quoted as saying, "This is a whole new third act! She literally threw that third act out and started from scratch." That's pretty interesting because while the book has been thoroughly enjoyed by millions of readers, the ending is the one thing that sticks out to most of them.

Some love it, some hate it, but almost everyone agrees that it's controversial. I truly hope that she doesn't go all Hollywood with the ending, but I have a sneaking suspicion that Fincher wouldn't let her even if she tried.

The first trailer hit today, but we'll have to wait until October 3 to see how it all plays out on the big screen.