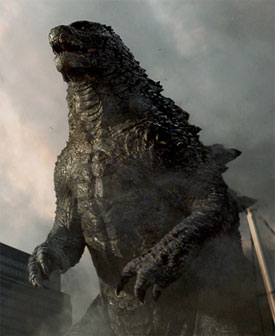 I expect big things to happen this week. Your usual MMM host is on vacation so I'll be filling in the best I can.

Last week, John had to step out of the office briefly for two separate apointments. Each time, big movie news hit. First was the release of the Batfleck photo. Two days later it was the Hunger Games Mockingjay first-look. With John being out all this week, I expect some colossal news. Perhaps they'll finally announce a sequel to Citizen Kane.

In the meantime, let's dive into another Triple M in the usual John style.

Godzilla smashed the competition to top the box office with $93 million in its debut. I'm a bit surprised that this giant lizard is still viable. The series started way back in 1954. That makes it older than the James Bond franchise by nearly 10 years. That and 1998 Godzilla film bombed horribly. Combine this Godzilla resurgence with the recent Transformers successes and Pacific Rim, I guess size does matter for film-goers.

Neighbors held on to second place with nearly $26 million. The Amazing Spider-Man 2 continues to perform well with $16.8 million. The only other new film in the top 10 was Million Dollar Arm. The fish-out-of-water baseball family-comedy made $10.5 million, good enough for fourth. Disney's effort at counter-programming against Godzilla seems to have failed. I personally know several families who opted for the lizard over baseball.

Things will get really interesting this weekend at the box office. X-Men: Days of Future Past premieres alongside another family-comedy, the Adam Sandler and Drew Barrymore starrer Blended. We could easily see three Marvel comics properties (with Captain America: The Winter Soldier) in the top 10. That brings a tear to the eye of this comics fan.

That's all I have for you this week. I need more coffee. With a little creamer and sweetener, I will certainly... mix well.