New trailer for 'Guardians' - Is this Marvel's biggest risk to date? 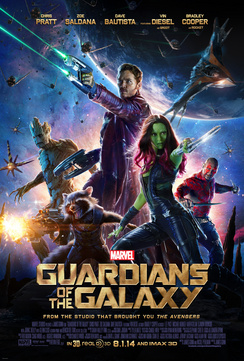 Marvel Studios has released the new trailer for this summer's Guardians of the Galaxy. It's packed with outer space action and some silly laughs. It's great to hear the voice of Vin Diesel as tree-like Groot and Bradley Cooper as wise-cracking Rocket Raccoon.

Take a gander at the trailer that recently dropped on Facebook along with a Q&A starring cast and crew. I really dig the old-school, one-hit-wonder music in the trailer.

In my estimation, Guardians is the biggest risk so far for the comics studio. Going for it is the huge momentum built by the other 2014 Marvel films: Captain America, Spider-Man, and X-Men. Those are well-known properties in at least their second film iteration. GOTG is not nearly as identifiable by the general public. Star-Lord, Gamora, Rocket, Drax and Groot aren't household names like Iron Man, Hulk, and Thor.

Another aspect going against Guardians is its creative team. Director and co-writer James Gunn has made only a handful of films including his 2006 debut Slither and 2010 indie superhero comedy Super. This is the first film credit for co-writer Nicole Perlman. By comparison, Jon Favreau, Kenneth Branagh, Joe Johnston, Joss Whedon each had extensive resumes before helming big Marvel properties. On the other hand, Iron Man 3's Shane Black and Thor: The Dark World's Alan Taylor each had similarly short filmographies. Those filmmakers did have the benefit of well-known properties and solid star power.

Speaking of cast, can Chris Pratt carry the film as Star-Lord? Everyone loves him from Parks & Recreation and the other supporting roles he's done but he's not yet proven he can lead any film, let alone a summer blockbuster. Everything totaled, this is a massive risk for Marvel and parent Disney. Essentially it's the Marvel brand selling the film.

Guardians' budget is a reported $150 million. The U.S. box office gross for every Marvel studio production since 2008's Hulk reboot has surprassed its budget. I'm not sure GOTG will manage that mark.

*Figures in the millions USD. Not adjusted for inflation.

Anticipation is growing for the film, thanks largely to the teasers released before. This fun new trailer will help as well. I wonder if that awareness is only among the comic con-attending, geek-loving contingent with which I identify. I doubt your mom could identify Groot from a line-up of tree-themed comic book characters.

Guardians of the Galaxy hits theaters on Aug. 1.