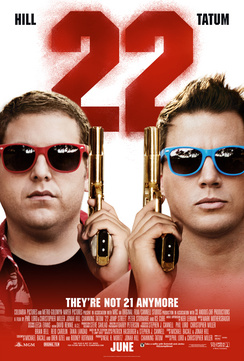 This one is going to be a bit different. Since I'm at my home inspector's beck and call this morning, today's MMM is most likely going to be a MAM.

I thought about doing a really quick version that was skimpy on the details, but in the end, there's just been so much that I wanted to talk about that a short MMM was impossible. So, please bear with me as this morning afternoon's report is probably going to be a bit scattered and messy.

Of course, this sort of report is fitting with a weekend that saw a little bit of everything and then some. If you're looking for Star Wars: Episode VII news, then you won't be disappointed as a few situations arose over the weekend that may affect the film.

But, we'll get there. Now, let's take a look at this weekend's box office where I wonder if we are all doomed a slow, painful death.

It was bad enough when 21 Jump Street shocked the world and opened in first place with $36 million, but the sequel shockingly outpaced even its rosiest predictions to the tune of a $60 million opening. To put that into perspective, only one other R-rated film has opened higher and that was The Hangover Part II. The silver lining of that performance though was the disappointment that it brought upon viewers ensuring that the third Hangover film would never see the top spot at the box office.

Somehow though, 22 Jump Street is getting great reviews and strong word of mouth which means that 23 Jump Street is going to happen and most likely break box office records. You can see why I'm concerned about the fate of humanity now, right?

The Jonah Hill/Channing Tatum starrer is a virtual lock for $175 million and could even flirt with the rarified air of $200 million which has only been touched five times by an R-rated comedy. In fact, there have only been a total of 11 R-rated films to surpass $200 million in box office all time.

So yeah, now that we are doomed as a species, I suppose we should at least talk about the rest of the box office, eh? In second place How to Train Your Dragon 2 debuted with $50 million which seems at first glance like a good performance. And yet, it only made about $7 million more than its predecessor.

Yes, I know, more is better, and the first film finished up with over $217 million, but animated sequels are expected to far outpace their original counterparts. Throw in the fact that there's a very real dirge of family-friendly films at the box office right now and this performance seems like a big failure.

The ultimate fate of the franchise is still unknown and it's still possible that with strong legs, How to Train Your Dragon 2 will surpass the original film in box office, but I could see it struggling to even reach $200 million in this very congested part of the calendar. If that happens, then I wouldn't count on any future films in this franchise.

Elsewhere, last week's front-loaded box office winner The Fault in our Stars tumbled greatly to fifth place and an estimated $15.7 million in box office receipts. The film will still easily push past $100 million, but any chance of it setting any records seems to be dead (no pun intended).

Maleficent continues its slow and efficient pace with a third place performance to the tune of $19 million. With a cumulative box office total of $163.5, the film looks poised to surpass $200 million and end up as yet another success story for Disney. Tom Cruise, on the other hand, is going to struggle to get to $100 million for his latest effort Edge of Tomorrow. The film only made $16.1 million in its second frame for a total of $55.6 million. Are Tom's better days behind him or is he just poised for a killer comeback with the right material?

X-Men: Days of Future Past leaped acros the $200 million mark this weekend with $9.5 million and a healthy $205.9 million cume. While competition is only going to get more fierce, I still think that it has an outside shot to get to $250 million. One other film is going to hit the $200 million club this week as The Amazing Spider-Man 2 brought its total to $198.4 million through this past weekend. It won't quite reach the $262 million threshold of its predecessor, but it still made a decent amount and enough to guarantee that the remaining two films on Sony's schedule get made.

At first, we had good-natured fun with the freak accident.

But then it was announced that the fracture was pretty serious and would require surgery and screws to mend. The latest word is that the actor is hoping to announce good news soon, but that he could be sidelined for up to 8 weeks.

Given that rumors continue to persist that Han Solo is at the center of this film's action, any prolonged absence from the set is bound to wreak havoc on the shooting schedule.

This week's news centers around those spinoff movies and one key component from casting on Episode VII. They seem to think that Domhnall Gleeson's red hair and striking resemblance to a young Mark Hamill could suggest that he's playing Luke's son and that Luke's flame from the now jettisoned Expanded Universe Mara Jade might be making an appearance in the film.

It's an interesting thought to be sure, but I've always thought of the Jedi lifestyle as being a celibate one. I mean, we all saw what happened in the prequel trilogy when Anakin tried to conceal his relationship with PadmÃ©. This got us thinking in a whole other direction on this, but we're not quite ready to go there yet, but stay tuned.

Take care this week and until next time, mix well!

Phew. After a busy weekend, I'm pulling the plug on this week's MMM. Until next time, mix well!