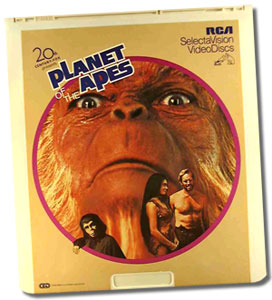 Your usual host John is off today. He's selling a house and preparing to move. You know, minor stuff. That allows you and I to have some personal time over morning afternoon coffee. How you doin'?

I've been thinking lately about video formats. We've gone through quite a few over the years: VHS, Beta, UMD, HD-DVD. Those are just the most prominent of obsolete video mediums. There are a number of others that Hollywood has tried and abandoned over the years. My pal Tommy over at the Top Hat Sasquatch blog reminded me of RCA SelectaVision video discs. No, not LaserDiscs. These were the precursor to LaserDiscs that used a stylus to read the 12" platter rather than a laser. Basically, they were record players that played video on a connected TV.

They were also called Capacitance Electronic Discs, or CEDs, but I don't recall anyone referring to them as that. Video disc or RCA video disc were the common names. I remember going to a friend's house in fourth or fifth grade to watch Tron (yes, the original). Like a vinyl record, you had to flip the disc midway through.

Tommy has been mocking up recent hit movies in the antiquated format. Here's a cool image for The Avengers he posted on Instagram. He promises a full post with a bunch of others. Like LaserDisc, I love this format for the large artwork that begs to be displayed. (Full disclosure: I occasionally write stuff on the side for THS.)

Reading the history on Wikipedia, it's clear to see why this disc format didn't survive. RCA began developing the system way back in 1964 but wasn't able to bring it to market until 1981. By that time, VHS, Beta, and LaserDisc were getting off the ground. The biggest disadvantage to CEDs -- besides that whole flipping over thing -- were their limited life span. A disc would only last about 500 plays. Kids today watching Frozen could blow through that in a weekend.

Surprisingly, the format lasted until 1986. That's when discs stopped being manufactured. You can still find old CEDs and players on eBay. No word on their mileage and remaining lifespans. I may have to pick up The Empire Strikes Back for my collection.

Switching gears rather abruptly -- who needs segues? -- primates dominated the weekend box office. Dawn of the Planet of the Apes debuted at number one with $73 million in sales. Honestly, I'm not impressed. Had an actual ape directed the movie, then I'd be impressed. Seriously though, we have chimps who know sign language and can paint. It's concievable they could create stories, right? Life imitating art, my fellow doomed humans.

Just because we bitch about it incessantly, let me point out that four of the top five at the box office are sequels. Oh, and we have two more sequels debuting this week, Planes: Fire and Rescue and The Purge: Anarchy. At least we also get Sex Tape for some wholesome, American-made originality.

Only two weeks until the next eagerly anticipated film of the summer: Marvel's Guardians of the Galaxy.

That's all your fill-in Monday Morning Mixer host has for this week. Until next Monday -- and John's triumphant return -- mix well!