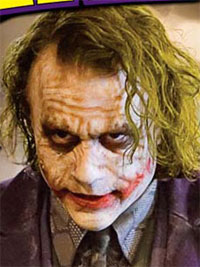 Jared Leto has some big shoes to fill as the Joker

This is an interesting time of the year. March has traditionally been a dead period when it came to big box office films, but thanks to The Hunger Games, Summer can technically start anytime now.

So, while most of us are still digging out from an unusually late deep freeze, Hollywood is hoping that March will provide the spark that will jumpstart a massively packed year of huge box office performers.

I would argue that 2015 is over performing at the box office thus far and yet, the biggest hit of the year is finding audiences fickle as box office receipts practically dried up this weekend. If the old saying is correct, then we can expect to see a lion's share of hits heat up the old turnstiles before the gentle month of April will see a return to normalcy.

I'm not sure that I'm buying it, but if there's one that the early returns from 2015 can tell us it's that the unpredictability that we've come to love (loathe?) about the box office is alive and well in the new year. March shows some promise in four films that I think will all bust through the $100 million level.

But, as they say, nothing is certain. First, we must put a box on February before we look ahead to this month. So, grab a cup of your favorite beverage and let's get mixing.

After two strong weeks of rising to the box office challenge, Fifty Shades of Grey fell limp in its third outing. I'm not entirely surprised by the drop-off, but the severity of it is a bit troubling. Fifty Shades of Grey was always going to be a front-loaded performer, but I figured after the massive opening weekend that repeat business and decent word-of-mouth would guarantee that it would be the first 2015 film to top $200 million.

Instead, the steamy film responded with a $10.9 million third weekend which was another precipitous drop week-to-week. With a total box office take of $147 million, the once promising earner looks like it will struggle to finish with $165 million. With the sequels uncertain, this 180 turn at the box office will almost assuredly factor in to the decision as to whether we see any more Shades of Grey.

This weekend's "big" winner at the box office was Will Smith and Focus. The one-time top of the box office rainmaker regained his spot, sort of. While Smith did reascend back to the top spot at the box office, the dollar amount is noticeably smaller than his previous trips.

It had been seven years since Will Smith graced the top spot in a non-franchise film's opening weekend, so it's good to have him back. Tim and I talked about the crossroads that Will Smith's career is at in our latest podcast, but I'm not yet convinced that Focus is the film to bring big Willy back.

Focus only earned $19.1 million at the box office which, sure, is better than Seven Pounds' $14 million opening, but far less than After Earth's $27.5 million. Those two films went on to gross $70 million and $60 million respectively and Focus will struggle to reach those numbers.

During his prime, Will Smith's films have consistently grossed over $100 million, but it's becoming clear that his days of simply being able to carry a movie on his name alone are long gone. This is sad because I always think that Will Smith brings a certain panache to his roles and now it seems that his track record will force him away from more mainstream films. Of course, having only been in three films in last seven years, some would argue that Will Smith's time has come and gone already.

The Lazarus Effect, the new film from horror producer extraordinaire Jason Blum, opened in fifth place with $10.6 million. The good news is that his films tend to be made with minuscule budgets, but the bad news is that this film is tracking to only end up with half of the usual box office of his earlier films.

There's been a sort of a push back of late to horror films and this might be the nail in the proverbial coffin. But don't worry, horror is an evergreen genre and it won't be down for long until the next wave comes in to take it to even higher levels. For now though, The Lazarus Effect will struggle to end up with $30 million. It should still turn a profit, but not as large of one as Blumhouse has become accustomed to these last few years.

The last box office mention today is reserved for American Sniper. With its weekend take of $7.7 million, the film has brought its total box office tally to $331 million. At some point this week, American Sniper will overtake both Guardians of the Galaxy and The Hunger Games: Mockingjay Part 1 to become the biggest grossing film of 2014.

This is significant in many ways, but most notably American Sniper will become the first original film (non sequel/non comic book film) to lead the annual box office since Avatar in 2009. Before Avatar, you have to go all the way back to 1998 and 1997 for the next original top box office grossing films in Saving Private Ryan and Titanic, respectively.

Goddard directed The Cabin in the Woods and was working on the now defunct Sinister Six film.

The film has decided to cast real life "shark" as President in Mark Cuban (get it from the show Shark Tank?) and Ann Coulter as Vice President.

That's an interesting choice for sure.

And then tweeted an after shot... presumably.

That's a lot for a Monday. Until next time, mix well!