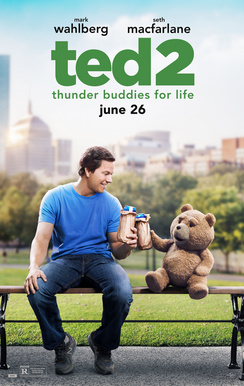 The words Ted 2 and red band trailer are pretty much synonymous as there really isn't anything family friendly about this raunchy teddy bear. So, we aren't surprised that Universal has released an extended red band trailer for the upcoming sequel.

This three minute extended trailer really focuses on the vulgarity and it's clear that they know how to please their audience. It's good to also see the extended Tom Brady "perfect spiral" scene that we heard about late last year. Also, it would appear that director and voice of Ted Seth MacFarlane has been hitting the ADR hard in post as Ted's line about four-time Superbowl champ is current through this year's win by the New England Patriots.

Ted 2 is set to hit theaters on June 26 with Mark Wahlberg returning while Amanda Seyfried takes the romantic lead reins from Mila Kunis.