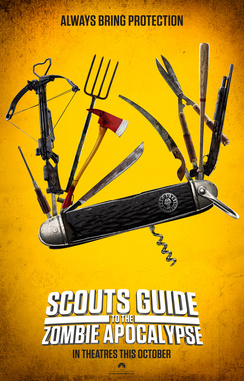 What's that? There were no huge Star Wars developments over the weekend? No celebrity did anything so outlandish as to require TMZ to go into overtime?

Sounds like a pretty low-key weekend, which can mean only one thing. Summer is officially winding down for the year. It seems like only yesterday that we all got gleeful when Age of Ultron officially kicked off the Summer blockbuster extravaganza with a healthy $191 million haul in its opening weekend in early May, but little did we know what laid ahead.

At that point, I was still convinced that this was the year that Disney would finally ascend to the pinnacle of the studio summit, what with two Marvel and two Pixar films not to mention a new Star Wars film to come this year. But, little did we know just how massive Jurassic World would be. Heck, it's still making over a million dollars at the box office each week.

For the record, it's total haul currently stands at $639.6 million, good enough for third place on the all-time top domestic box office list. Titanic is safe in second place and only Star Wars: The Force Awakens looks to have any shot in the near future of reaching these rarified altitudes.

And yet, the Summer was more than just a litany of Universal hits and one bomb (Ted 2). It was a Summer that should be up over last year's drought and the entire year looks to be up in a big way with a loaded finish to 2015 ahead.

Will 2015 live up to my prediction of being the highest grossing year ever at the box office? The numbers look very promising, but there's still a lot of work to do yet. So, without further delay, let's tackle this past weekend.

Tackle? That can only mean one thing. Football season is nigh.

Universal continued its onslaught at the box office by winning another weekend crown after Straight Outta Compton held on to its top spot this week. The music biopic behemoth took in a rather nice $26.8 million in its second outing.

So far, the film has taken in $111 million and is well on its way to finishing north of $175 million and some decent holds could take it over $200 million. As for the other films? The weekend wasn't so kind.

Sinister 2 was D.O.A. with a meager $10 million in its opening weekend. The horror sequel about homicidal kids will struggle to make it to $40 million.

Hitman: Agent 47 failed to make a killing at the box office with a weak $8 million take. The perfect killing machine will need perfect execution just to hit the $30 million level before it bows out of theaters.

I was really rooting for American Ultra, but it failed to execute even to modest expectations. The film barely made a dent in the box office with a $5 million opening. It's a rough ride for Jesse Eisenberg and Kristen Stewart and it will only get worse as it doesn't look like the film will top $25 million.

Overall, August is down considerably from last year's record-setting performance paced by the unexpected breakthrough from Guardians of the Galaxy. However as we touched on above, the overall and Summer numbers should surpass last year's marks and continue the train rolling towards the loaded end of the calendar year.

Of course, we live in a different world these days, so I figure it would be impossible in today's social media world for directors to be able to completely distance themselves from a stinker.