We can handle the 'Truth' trailer 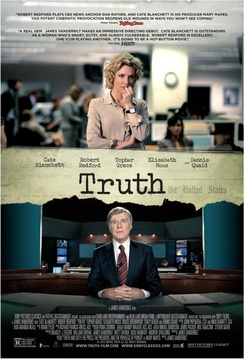 To be or not to be... the spitting image of a real-life person that you are portraying in a film, that is the question. There seems to be a great divide in Hollywood as to how important it is to get someone who looks like a historical person versus someone who can truly capture the spirit of the person despite not looking anything like that person. Case in point, the latest Steve Jobs film features Michael Fassbender in the titular role despite not even possessing a passing resemblance to him.

And yet, Fassbender is drawing near universal praise for his portrayal while Ashton Kutcher, who looked like a carbon copy of the Apple pioneer in his own film on the man's life Jobs, was generally panned. This year's Oscar race should be interesting in furthering this debate as the aforementioned Fassbender and Robert Redford (as Dan Rather in the forthcoming Truth) look nothing like their real-life counterparts, while Johnny Depp transformed himself completely in his role of Whitey Bulger in Black Mass. All three actors look to be in the running when the Oscar noms are announced next year.

To see just how much Robert Redford doesn't look like Dan Rather, simply check out the first trailer for Truth which debuted this week. Truth hits theaters on October 16.