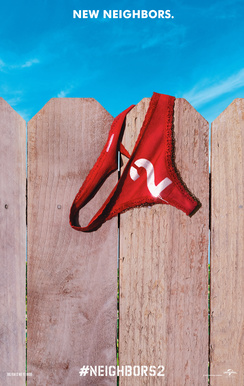 You know, the whole time I was watching Neighbors, I kept thinking to myself that it would have been so much better if a sorority had moved in next door. It was either my complete hatred of Zac Efron, my boredom with the whole trope of "fraternity goes bad" movies or my preference to seeing bikini-clad young ladies over Zac Efron's abs for the millionth time, whatever the case may be, Seth Rogen has answered my prayers.

Seth Rogen and Rose Byrne are back and their neighborhood is under attack once again, but this time, a sorority decides to move in next door. I'll be honest, I actually enjoyed Neighbors more than I thought I would and was sort of looking forward to Neighbors 2. After watching today's trailer, that interest level has been ratcheted up a notch or two.

And no, it's not just because of all the bikini-clad women either, there's real comic chemistry between Rogen and Byrne and at this point in my life, I can relate to their characters. My wife and I also have young children, but we like to think that we're still young and hip. It also doesn't hurt that Seth is wearing a t-shirt from my favorite band, Pearl Jam.

Heck, even Zac Efron (and his abs) are palatable in this trailer, so that's a minor miracle right there. Neighbors 2: Sorority Rising debuts in theaters on May 20.