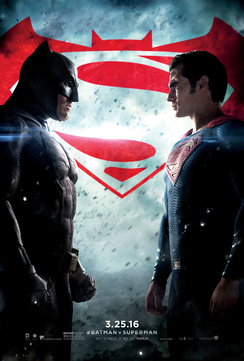 It's a Batman world and we just live in it. Or is it a Superman world?

One thing is certain, this weekend's box office performance proves yet again that critics have probably outlasted their usefulness in modern society. Before we get into the nitty gritty of this weekend, let's take a moment and reflect upon everything that movie critics have given us.

Without them, would we have any use for the age-old "thumbs up, thumbs down" designation that dates back to Ancient Rome and the Colosseum? Would thumbs have gone the route of the dodo bird and become as useless as that little toe? Who knows, but it's fun to think about it.

We jest, but in today's society movie critics have pretty much lost their power of influence over movie audiences. Before the Internet, we had to rely on their weekly TV programs or newspaper articles to help guide us to those films that we would enjoy or despise. We didn't have access to social networks that give us instant reactions from friends and family that better know our preferences and movie likes and dislikes better than some stranger.

Now, we only have to log into Twitter or Facebook and we can get a general (or specific) idea of how good (or bad) a film is with a few clicks. Sure, savvy critics have taken to the social sphere as well, but their voice is generally lost among the sea of avatars clamoring for our attention.

This weekend is just another prime example that audiences will watch films they want to see no matter how universally the critics diss it. And this is where we begin our Monday Mixer.

Batman v Superman: Dawn of Justice was by most counts a huge win for Warner Bros. by setting a March opening weekend record with $170 million. Its opening is the sixth highest opening for a film ever and is the fourth film in the top six to debut in theaters in the last 365 days.

What does that mean? That means that those articles touting the death of movie theaters are a bit premature to say the least. No, it proves that people will go out and watch films at megaplexes, but it helps to have a comic book hero or three in your film. Of the top 10 opening weekends of all time, six of them are comic book adaptations. Interestingly, three of them are from DC and three are from Marvel.

With seething reviews hitting the Internet late last week, I was concerned that their universal hatred would deter some of the earning power of Batman v Superman: Dawn of Justice, but it was clear when reports of two hour wait lines at theaters started to appear that Warner Bros. had a hit on their hands. The real question is where the film goes from here.

The closest comp title is 2013's Man of Steel which opened with $116 million, but faded quickly with a 65% drop in weekend two followed by a 50% drop. Needless to say, Man of Steel overall take of $291 million was a bit disappointing after its big opening weekend. So, if we extrapolate those numbers to Batman v Superman: Dawn of Justice, a total box office in excess of $400 million is still possible. But, the early word of mouth on Batman v Superman: Dawn of Justice is much better than Man of Steel, so I expect it will follow the path blazed by Avengers: Age of Ultron. That being said, it should end up with about $430 million.

My Big Fat Greek Wedding 2 opened up better than I expected with an estimated box office of $18.1 million. The sequel also suffered from mostly negative reviews, but it seems like it was a good counter-programming choice to Batman v Superman: Dawn of Justice. Ardent fans of the original film showed up for the sequel despite the long delay between the two films which makes a total take of $60 million well within the realm of possibility.

Where does he get those wonderful Mixers?