Monday Mixer: The 'Secret' is out 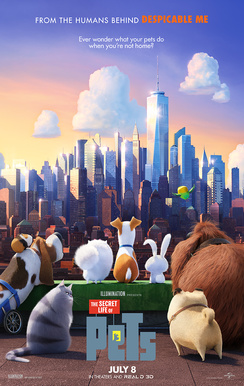 This weekend was truly one for the history books. And no, I'm not talking about The Secret Life of Pets, although it had a pretty impressive weekend too. This weekend I was able to go to the theater to see two separate movies for the first time in almost five years.

The main reason for my theatrical absence is the exact same reason that I got to spend four glorious hours there this week, kids. My children (almost three and four) have finally gotten to the point where they both can sit through a film and not freak out. On the one hand, this is great news - more movies in theaters! On the other hand, more children's movies.

It's not that I don't love children's movies, but there seems to be more chaff than wheat in their offerings. Thankfully, I didn't have to worry about any filler flicks this weekend as we watched Finding Dory and The Secret Life of Pets. In a mere 24 hours, we were able to compare the reigning champion of animated entertainment and its heir apparent.

And the results? Well, it was unanimous, but you'll have to keep on reading to find out which film we all preferred.

This weekend was a litmus test of sorts for Illumination Entertainment. Last year's massive opening for Minions helped to solidify its status as a major player in the animation game, but some critics deducted points for the film being a spin-off from the Despicable Me films (to be fair, it's more of a prequel than a spin-off, but I digress). They called Illumination a one-hit wonder.

Hop didn't exactly light the box office on fire in 2011 and their only other non-Despicable Me film The Lorax was obviously adapted from an existing and successful property. So, the pressure was on The Secret Life of Pets to build upon Illumination's brand or prove the critics right. I think it's fair to say that no one will be calling Illumination a one-hit wonder any time soon.

The Secret Life of Pets set a box office record with its $103 million opening this weekend. That amount is the largest opening ever for an original animated film. It earned a full $13 million more than previous record holder Inside Out. While The Secret Life of Pets didn't top Finding Dory's top animated opening weekend number set a few short weeks ago, it's hard to argue against a potential passing of the guard. Illumination now holds three of top eight animated openings of all time, and only Pixar can lay claim to a better record (three of the top seven animated openings).

Finding Dory just broke the $400 million barrier and is poised to become the highest grossing animated film of all time by surpassing Shrek 2's $441 million record. I'm not sure if there's enough proverbial oxygen in the box office fire to sustain the success of The Secret Life of Pets long enough. I think it ultimately limps to a very respectable $375 million thanks mostly to a dearth of family-friendly films coming down the pike.

The other big new release this weekend performed exactly to its expectations. Mike and Dave Need Wedding Dates earned $16.6 million which was right in the middle of the pre-release projections. Fox was secretly hoping that this film could be the new Wedding Crashers with an opening closer to $25 million, but it wasn't meant to be. But it's not a bad showing for Mike and Dave Need Wedding Dates and a final tally of around $50 million will do wonders to help embolden Fox's numbers on an otherwise forgettable year at the box office.

Whoops. I totally forgot to finish the train of thought about which film that we all preferred. Talk about the ultimate cliffhanger. We all enjoyed The Secret Life of Pets more than Finding Dory. Don't get me wrong, they were both really good, but there were a few more lulls in Finding Dory and the kids weren't as excited afterwards as they were when they saw The Secret Life of Pets.