Monday Mixer: It's a 'Sausage Party' 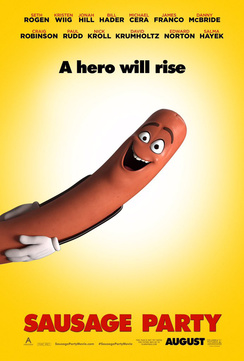 What is the peak moment of the Olympics?

Are you a swimming fan? Or gymnastics? Or track and field?

It seems that just like the Olympics, the box office has a little for everyone this month and it's getting a bit difficult to determine just what it is that someone will go see. There's plenty of action and laughs. Animated films for adults and kids. And plenty of adventures and scares that are quite literally out of this world.

But much like the closing ceremonies of the Olympics, the summer box office period must eventually end and that end is in sight. With Labor Day on the horizon, we will soon know just how this year stacks up to its peers. Looking ahead, it would seem that 2016 will fall just short of last year's mark, but the total per film should go up a bit, so it's really a mixed bag of sorts.

But isn't that just life in general? For the record, my favorite sport at the Olympics is Team Handball. I can't get enough of it, although thanks to this ridiculous coverage and the fact that the U.S. doesn't field a team in the Olympics, I have had to settle for streaming the Handball games.

Sometimes you really can't get everything that you want.

It was another mixed bag at the box office. Suicide Squad went over $200 million at the box office in only its second weekend, but it lost nearly 68% of its business from its opening weekend. That's a pretty steep drop, one that is very reminiscent of Batman v Superman: Dawn of Justice's 69% drop between weeks one and two. The latter film continued its steep decline before ending with "only" $330 million.

Given the changing demographics at the box office as more kids return to school, Suicide Squad will see a similar performance over the next few weeks. Suicide Squad should crawl to $300, but that begs the question, is that considered a success?

Much like its DC predecessor, the expectations were much higher before its release. These films were supposed to be the ones to finally compete in quality and box office prowess of their Marvel brethren. That mythical line of demarcation is set at $400 million and, so far, the DC films haven't even sniffed that number.

And yet, consistently reaching $300 million at the box office isn't something to scoff at. Quite the contrary, it's pretty impressive, but yet, we can't completely ignore the front-loaded aspect of their business. While sure, most films these days are front-loaded, the Marvel films succeed mainly because of their longevity. That is one thing that DC has yet to crack.

If you're looking for good news at the box office, you don't have to look any further than second place this weekend. Seth Rogen's R-rated animated film Sausage Party performed at the high end of expectations and even flirted with the possibility of taking the weekend crown from Suicide Squad before ending up with $33.6 million.

We are sort of in unchartered territory when it comes to raunchy animated films. Sausage Party represents the best opening for Rogen since 2014's Neighbors, but I don't see it following the same trajectory. I foresee a quick drop off and it will eventually peter out around $75 million. I think a lot of this performance is front-loaded with curiosity, but the word-of-mouth has been pretty strong, so a final number around $100 million wouldn't surprise me at all.

More good news fell on Disney's doorstep (as if they needed anymore, right?) when Pete's Dragon earned a tidy $21.5 million at this weekend's box office. The remake of the live-action/animated hybrid film from the late 1970s is earning strong praise so it should have pretty decent legs.

At this point, a total approaching $75 million isn't out of the realm of possibility.

The Quick Hitters will return next weekend.