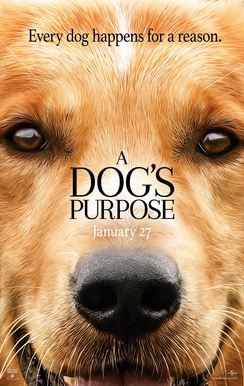 So, did anything interesting happen this weekend?

Well, there was that whole protest thing going on. No, I'm not talking about the airports, I'm talking about animal rights activists who took offense to a video leaked out for the new film A Dog's Purpose that purported to show one of the film's canine stars being forced to act in a risky scene.

I know, it's hard to keep all of the protests straight these days. But, this is the reality that we now find ourselves in and ultimately, the public will decide the direction things will take, as it always does. So, what did the public think of A Dog's Purpose?

I suppose we should get into that, eh?

What all the fuss around A Dog's Purpose did accomplish is to deflect some attention from what the top story should have been at the box office and that's the return of M. Night Shyamalan to box office prominence. It's not like this wasn't something that we could see coming.

His last film, The Visit was considered a big success when it earned $65 million against an ultra small budget back in 2015. So, when Universal/Blumhouse decided to put some faith (read more money) behind Night for his next film Split, you sort of felt that we were about to see a little Night resurgence.

What we didn't see though was just how big of a resurgence we were going to see. Split earned $26 million this weekend for an incredibly strong hold in its second weekend. In fact, its 34% drop is the smallest drop between the first two weekends of release of a horror film in at least a couple of years.

Yeah, Night is back.

With Split set to cross $100 million this weekend, it's not inconceivable that it could finish up with $150 million when all of the receipts have been tallied. The interesting thing will be to see what comes next for Night. Will he continue this string of box office hits or will he once again let us all down? Time will tell.

Something that we might never know though is just how much this leaked video controversy crippled A Dog's Purpose. It opened with $18.3 million which was pretty much in line with pre-release expectations, but the way the film was trending before the video was leaked, an opening weekend number closer to $30 million was quietly being bandied about.

It's safe to say that the controversy did affect the final number to a certain extent, but the extremely positive audience and critical response might help it to recoup most of that difference in coming weeks. I suspect that it will have a strong hold this coming weekend and lead to a final tally close to $75 million.

The other new wide release Resident Evil: The Final Chapter proved that the film really should be the last chapter of the sci-fi/horror franchise. The sixth film in the series of films based on the successful game franchise earned $13.8 million this weekend, which was the worst opening so far for a Resident Evil film. At this point, it will struggle to earn $40 million and will mostly like be the death knell on the franchise, in case the title wasn't enough of a clue.

Of course, they have released eight (and counting) Friday the 13th films after The Final Chapter, so there's hope. Speaking of Friday the 13th, more on that later.

This weekend was also the first one after last week's Oscar nominations and a couple of films got a nice Oscar bump. Not surprisingly, the top nominated film La La Land saw a remarkable 43% increase at the box office with a cool $12 million. That brings the Oscar contender's total to over $100 million and it should cruise to $130 or so before next month's ceremony.

The other Oscar bounce went to an unexpected film. Hidden Figures is quietly surging and it only fell 11% in its fourth weekend of release. The popular film also took home the top prize at this weekend's SAG awards, which will only help its long-term success. Hidden Figures added $14 million to its coffers this weekend and looks to finish with upwards of $150 million.

While Hidden Figures might have declared the Best Picture Oscar a two-film race, Emma Stone solidified her role as the odds-on Best Actress favorite with her SAG win. See all the winners here.

I know it's a long read, but trust me it's worth it. Check it out here over at TheAtlantic.com.

It's hard to imagine those two in the roles that eventually came to life thanks to Emma Stone and Ryan Gosling, but it makes for an interesting thought. While I think that Watson could have given Stone a run for her money, Gosling is just perfect as Seb and I think Teller would have been a lesser choice, despite he and director Damien Chazelle creating magic in Whiplash.

Read the story here, where they elaborate that the two who passed on La La Land might be having regrets about it now.

You can read it in its entirety here. Friday the 13th is set for release on Friday, October 13 this year, but the film has been delayed numerous times, so we shall see if they stick to this release date.