Review: 'Life' is reborn on Blu-ray 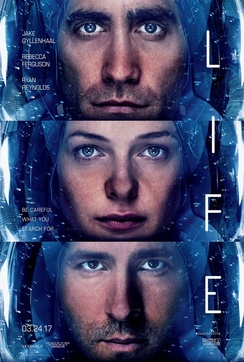 It's funny, some films are universally beloved while others are unanimously booed, but it is the rare film indeed that seemingly splits crowds right down the middle. Life is a film that is able to pull off that feat.

As a reviewer, I can understand the disparity in opinions because I went through the gauntlet of emotions while watching the film. I had pretty high expectations going into the film with the amazing cast led by Jake Gyllenhaal, Ryan Reynolds and Rebecca Ferguson and for the most part, the film lived up to them.

However, I wasn't so sure that it would. The film is very much in the vein of Alien films and it blurred the line between homage and blatant ripoff before it veers off into its own direction and saves the day as it were. In the end, the film stands on its own merits and it is a worthy new chapter in the voluminous record of Science Fiction films.

It seems that there have been films about alien life since the dawn of the silver screen. We have been searching for them. They have been attacking us. We have found a way to live peacefully. But mostly, it seems that the alien subgenre of Science Fiction has been preoccupied with their desire to cause humanity's extinction.

Not surprisingly, this is the case with Life.

You know what doesn't get discussed enough in these films? The fact that just about every film made focuses on alien life and its desire to exterminate us and yet we still seek it out and bring it back to Earth. I don't know, if it's me, I'd say hello to an alien with a nuke and call it a day.

Of course, that doesn't make for a very compelling movie, does it?

The best part of Life is without a doubt its cast. Initially, Ryan Reynolds was going to play the part that eventually went to Jake Gyllenhaal, but had to limit his involvement due to conflicts with another film. We won't talk about that one, it wasn't very good.

As a result, writers Rhett Reese and Paul Wernick (you might remember them from that other Ryan Reynolds smash hit Deadpool) punched up the humor in Reynolds' character and the result is a performance that really adds weight to the film. Speaking of Rhett and Paul, there is a bit of a twist that I actually didn't see coming that really helps to save the film. Naturally, I will let you discover that one on your own, but in retrospect, it seems obvious that they came up with a good hook and then worked backward from there.

The result is a film that is rather uneven at times but still delivers a satisfying Science Fiction story that is better than at least three of the Alien films. One unsung performance in the film is the one turned in by Rebecca Ferguson. At times, she is overshadowed by her male co-stars, but when she is given room to stretch her legs, she really commands attention. In fact, I would put her performance up there with Amy Adams' in Arrival as one of the best Science Fiction performances in the last decade or so.

Life is now available on 4K UHD, Blu-ray and DVD. We were fortunate to review the Blu-ray version and it is jam packed with goodies that really augments the film for the audience. With the sharp space visuals, I can only imagine that the 4K UHD version would be worth the added investment.