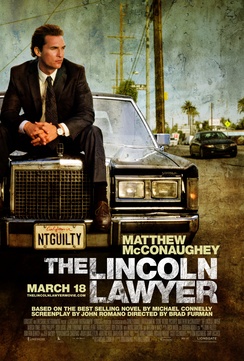 Many decades from now, the eternal question will be, when did Matthew McConaughey's resurgence in film begin? Or not. He could simply fade away as a one-time Oscar winner never to be heard from again.

There's another sub-genre of Matthew McConaughey that many people might not be aware of and that's the lawyerly Matthew McConaughey. Yes, the guy that popularized the random shirtless ab shot long before Zac Efron was even born, has played a lawyer on the big screen at least three times.

If there wasn't a more compelling reason to give the guy an Oscar, I'm not sure what it is. Anyhow, The Lincoln Lawyer is the latest lawyerly turn for McConaughey and, surprisingly, the only that I hadn't seen until I had the opportunity to review the 4K UHD version this week.

I have recently become a Michael Connelly fan and I've been reading his Bosch books the last few years, but I never really went back and familiarized myself with his Mick Haller books, the first of which became the basis of this film. As the half-brother of Harry Bosch, Mickey turns up in the Bosch books from time to time, so my introduction to the character came from these teases.

Even from these brief encounters, I knew that Matthew McConaughey would be perfect as the quirky bottom-feeding lawyer who works out of the back of Lincoln Towncar. I would argue it one step further, this role from 2011 was the catalyst that turned his career around and directly led to his Oscar-winning performance in 2013's Dallas Buyers Club.

After finally watching it, the only thing that I'm doing is kicking myself in the butt for not watching it sooner. It's right up my alley and the cast is beyond superb. Even six years later, it's astonishing to think that actors such as McConaughey, Marisa Tomei, Bryan Cranston and William H. Macy would come together for a first-time director for what might have been considered a sleeper potential film at best.

In particular, the work that William H. Macy turns in is beyond amazing as per usual and definitely reconfirms my belief that he is the best character actor working in the business today. He's also a hell of a lead actor as evidenced by his equally impressive work in Shameless.

The only question that remains is whether the 4K UHD version is worth the cost to upgrade over the current Blu-ray offering. As I hadn't previously watched the film, I did throw in the Blu-ray version to get a feel for the new enhancements. In particular, the blacks and the Dolby Atmos audio tracks were the most noticeable improvements on the 4K version.

There are a fair amount of dark scenes and flashbacks where the HDR is able to shine and these scenes, in particular, were the biggest benefactors of the 4K UHD offering. As someone who hadn't seen it, I was very glad that I got to watch it for the first time on 4K UHD as I feel that it helped to make the film that much more enjoyable.

Sadly, there are no additional new bonus features other than the previously available ones that you can find on the current Blu-ray version. That's not really a big surprise as The Lincoln Lawyer probably isn't a film that will generate much excitement by the cast and crew to come back to it and record new content.

That's OK, but it would make the upconvert decision easier if there was a treasure trove of new content to sweeten the deal. As it stands, if you enjoyed the film and were on the fence about buying it, then the 4K UHD version is the one that you should pull the trigger on. If you already own the Blu-ray and aren't a 4K UHD completist, then I would hold off for now and upgrade further down the road when the cost comes down a bit.

But, it does look beautiful on 4K UHD and even my wife stopped what she was doing to watch Matthew McConaughey do his thing. For a brief moment, I was jealous, but then I remembered that it was Matthew McConaughey, I couldn't blame her one bit.