I have been a huge fan of the Vestron Video Collector's Series since they came onto the scene. Basically, the main purpose of this series is to shine a light on those cult horror films of the from the 1980s through the 2000s. This installment brings us two films from the early 2000s from Producer Brian Yuzna, Beyond Re-Animator and Dagon.

Basically, the films are based either directly or indirectly on H.P. Lovecraft stories and were brought to life by the filmmakers that gave us Honey, I Shrunk the Kids. Yeah, that's a pretty severe contrast between family fare and independent horror, but it's also fascinating.

One of the fun things about the Vestron series is that it helps to also get this conversation going again. Back in the day, this type of discourse would take place in video stores daily as horror fans would discover these films and learn all about the bizarre connections that they would lead to from video store clerks. Now, the discourse has shifted online, but at least with the Vestron films, we are finally getting high-quality materials to draw inspiration from.

The first offering this month is Beyond Re-Animator, the third and final film in the Re-Animator series. Jeffrey Combs is back as Dr. Herbert West and the film takes place directly after the sequel Bride of Re-Animator and 14 years later. Dr. West is in prison for the crimes he committed in Bride of Re-Animator, but he doesn't let incarceration prevent him from continuing his research into reanimating corpses.

I have to admit that I saw the original Re-Animator much too young, probably in my early teens, but I was a horror buff by then. This was during the height of the horror boom in the mid-1980s and Re-Animator epitomized everything that we loved about this era. Unfortunately, the only reference that young people today get of the Re-Animator series is in the film American Beauty.

While the original film was typical schlocky goodness from this period, the sequels were exponentially way out there. By the time we get to Beyond Re-Animator, it's pretty apparent that it was a direct-to-video cash grab. OK, it did premiere on the SciFi channel, but that's not too surprising.

From a story standpoint, the doctor is back in despite being in prison for over a decade. It seems that being locked up won't prevent him from dabbling in his hobby of bringing people back from the dead. While the Re-Animator story has its roots in the classic Frankenstein tale, by the time H.P. Lovecraft gets around to telling it, there are certain zombie elements he adds that really paves the path for modern-day zombie lore.

Perhaps the best thing that I can say about Beyond Re-Animator is that the film certainly holds up well. In fact, I think that the film probably plays better today as a horror spoof than it did 17 years ago when it was considered more independent horror. There are some truly funny moments in it, perhaps unintentionally, that I never caught on to when I watched it all those years ago.

The biggest selling point of this film besides its debut on Blu-ray and the higher quality video transfer is the massive amount of bonus features. A calling card of the Vestron series, the bonus features alone make each offering worth a purchase simply to get the retrospective angle on the film.

For Beyond Re-Animator, we are treated with several interviews that feature the cast and crew. These interviews not only lay the groundwork for giving more background on the film but also add insight to the entire series. For instance, Beyond Re-Animator was directed by Brian Yuzna who produced the original Re-Animator, among many other horror classics. In particular, his interview/commentary adds so much to the process of making this film. For instance, I had no clue that it was shot completely in Spain, which makes sense given the predominant Spanish secondary cast.

The interview with actor Jeffrey Combs was also very illuminating. It's not too often that we get a horror franchise with a single actor appearing throughout its entirety, so getting his insight into bringing Dr. Herbert West to life was particularly interesting. There are several hours of bonus features on the Blu-ray that will delight even the most ardent fan.

Overall, it's nice to finally see Beyond Re-Animator on Blu-ray with a high-definition transfer that the film deserves. I know that fans have been waiting for this for a long time. If you're a fan of the series, then you'll definitely want to add this one to your collection. If you're a horror fan at all, then I would certainly consider adding this film. The Vestron series is an impressive love letter to this genre and there's so much to glean from the copious bonus features. 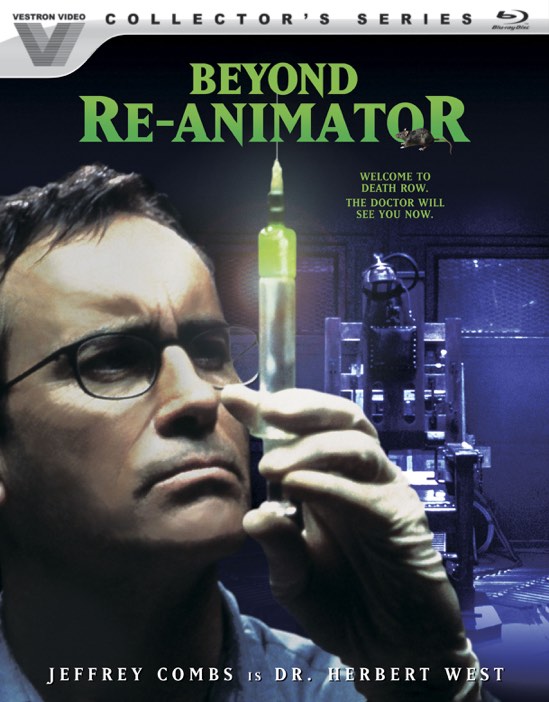 And now, for something entirely different as they used to say. While Dagon is also based on an H.P. Lovecraft story, there are few similarities to the Re-Animator series. Behind the camera, though, that's an entirely different story. Dagon is directed by Re-Animator director Stuart Gordon and produced by Brian Yuzna, the director of Beyond Re-Animator. So, it's not surprising that Lionsgate put them both out on the Vestron series together.

I don't recall catching Dagon when it was released in 2001, but it's possible that I simply forgot. Although, I find that highly unlikely. The film revolves around two couples that become stranded when their yacht crashes off the coast of a remote Spanish fishing village. When one couple goes ashore to seek help, they discover that the village is hiding a monstrous secret.

Overall, the film was ambitious for its time and save for some questionable CGI, it was an effective horror film. In a weird way, I got a real Wicker Man vibe from Dagon. I think it's probably from the isolated people that believe in human sacrifice to appease their "gods," but they both deal with similar themes.

Where Dagon does blaze its own path from other films of the era is in its study of human nature and deeper meaning. Sure the film on its surface is a silly horror film, but it really delves into the human psyche of isolationism and the onset of non-traditional unacceptable alternative practices.

Another flower in its cap is the various twists that the film takes. While I was a rather unassuming viewer, I was really surprised by several plot points in the third act. In fact, I'm still trying to wrap my head around interspecies incest that may or may not have happened. Yeah, it's that type of mind-bender.

Like all of the Vestron films before it, the bonus features for Dagon are quite impressive. As I was new to the film, I appreciated the featurettes that helped to make the connections between this film and the Re-Animator series. Again, these are the types of nuggets that would fly around a video store that we simply do not get in today's home entertainment reality. So, it's rather nice to be able to "interact" with a film more than simply being an uninvolved viewer.

Besides, where else will you find a connection between Dagon and Roy Disney? At the end of the day, Dagon is a fun little horror film that is a bit of an undiscovered gem that will hopefully get more notice now that it is in the Vestron series. If you are a horror buff, you will want to own this film. 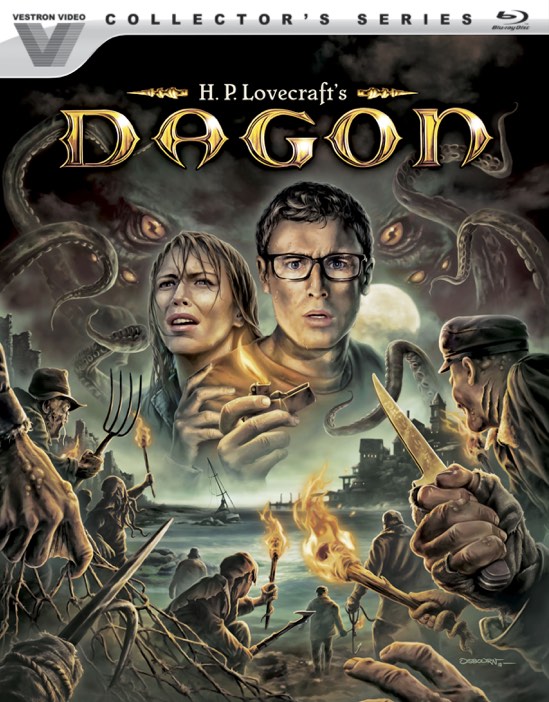