Review: 'The Punisher' on 4K is a rare glimpse at early Marvel 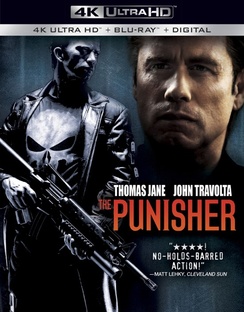 Everyone knows that they made comic book movies before Marvel created their own films with the debut of the Marvel Cinematic Universe (MCU), but the quality of these films varied. When Batman debuted in 1989, the modern era of comic book movies was born, but it would still be another decade before Iron Man would usher in the MCU.

Up until 2008, the best comic book movies belonged to DC with Superman and Batman, while Marvel was an afterthought when it came to films. Sure, they licensed their properties out to other studios, but movies such as Howard the Duck, the unreleased Fantastic Four film and the original The Punisher were widely panned as the subpar genre flicks that they were.

That all changed in the late 1990s when Marvel created Marvel Studio and started to take a more serious interest in their characters on the silver screen. At first, they licensed out their properties and turned them into successful movies with Blade, The X-Men and Spider-Man. Eventually, they went into the production business themselves and the rest is history.

The Punisher from 2004 was one of those tweeners in which they had more input into, but not as much as they would obviously have later on. It did pretty good business at the box office, but its earnings would be a drop in the bucket of the comic book movies box office receipts today.

The film adaptation was pretty faithful to the early Punisher comics that presented Frank Castle as a gritty urban vigilante. Frank Castle is an FBI agent left for dead after a mob boss kills Frank's family as retribution for his own son's death in a deal gone wrong. Frank doesn't die though and he is "reborn" as The Punisher to enact his revenge on the mob boss.

If you are not as familiar with these early attempts at comic adaptations, you will notice right away from the legacy trailer above that the film lacks the polish and gloss of today's Marvel films. Even with the modern Netflix take on The Punisher, they present the gritty vigilante action with a certain style that just wasn't in play 20 years ago.

And yet, there is something nostalgic in The Punisher that beckons to the action films of the 1970s. It has the feel of a Charles Bronson or Dirty Harry movie. It's barely recognizable today as a comic book movie, but I remember seeing this film when it came out in 2004 and enjoying the vigilante aspect and not really understanding the comic book connection.

The same thing happened for me with Blade. It was a kick-ass vampire flick first and foremost and a comic book movie second. I remember thinking of other vigilante films from the era such as The Crow. I realize that The Crow is also based on a comic book, but that's sort of my point. These films didn't base their identity on the fact that they are also a comic book. No, they were determined to succeed as a stand-alone film and The Punisher does that, for the most part.

That's not saying that The Punisher is without sin because boy there are many cringe-worthy moments in the film that really do not age well. But, it is a solid vigilante crime movie that is a fairly good representation of these type of films from the early 2000s.

Three different actors have played The Punisher in a feature film. You have Dolph Lundgren in the original 1989 version, Thomas Jane in this film and Ray Stevenson in 2008's Punisher: War Zone which is terrible. While Thomas Jane certainly does the best job bringing Frank Castle to life on the big screen, even his portrayal pales in comparison to Jon Bernthal's interpretation in the current Netflix series. Some people are born to play certain roles and after seeing Jon Bernthal as The Punisher it is a bit jarring to see anyone else in that role.

Thomas Jane is certainly capable in the role and there were plans to get the band back together for sequels, but as often happens, things fell apart. It would have been interesting to see how the character would have evolved in these movies, but alas we can not go back in time.

As it stands, The Punisher holds up as good as one can expect for an action film of this era. Sure, the movie shows its age at times and the audience's level of expectation of a comic book movie hurts it, but if you can set those aside, you will be entertained by this early Marvel film.

The Dolby Vision 4K UHD version of the film looks as good as the movie is going to look and it really does its best to cover up the flaws that show up with the ravages of time. The Dolby Atmos audio track on the 4K UHD is the real scene-stealer as The Punisher features the bombastic audio track that was a hallmark of action films of its time.

The included special features were all previously available on the Blu-ray version that was released a few years ago. However, they are rather impressive and provide a fun backdrop to a film that really helped to pave the way for the modern-day MCU that we currently enjoy.

If you're a fan of vigilante films or want to own a piece of comic book film history, then I would certainly recommend picking up The Punisher on 4K UHD.