Review: 'Venom' is an enigma, but an enjoyable one 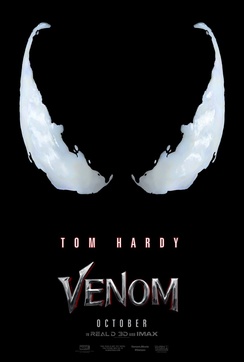 When you head over to Rotten Tomatoes and notice a huge discrepancy between the critics' score and the audience's score, then you know that you're most likely dealing with a comic book movie. While the rise of Marvel films has helped to stem the tide of such glaring differences of opinion, there's just something inherently polarizing about comic book films.

This disconnect is alive and well for Venom as it currently holds a 29% with the critics and a whopping 85% with audiences. That tells me that Venom is most likely a fun action film where you are expected to leave your brain at the door and enjoy the ride. And that's precisely what you get with Venom.

In this film, Venom, one of Spider-Man's biggest adversaries, is given an origin film that basically excises everything related to Peter Parker and his alter-ego from his story. And yes, I do see the irony of removing a would-be symbiote from the story of a symbiotic lifeform, but that's all part of the fun. No, this story focuses on Eddie Brock, an investigative reporter who loses his job and his fiancee, but finds a new lease on life (in a way) when he becomes a host to an alien symbiote that transforms him into Venom.

If you're familiar at all with Venom, you know that there is an absolutely ridiculous amount of vitriol directed towards the movie, mostly by critics. On the flip side, the film has earned over $200 million at the box office and by all accounts is a financial success for Sony Pictures. So, what makes this film such an enigma?

I think the problem that people who dislike Venom have is a desire for the film to emulate the Marvel Cinematic Universe (MCU) films. Those MCU films not only packed a wallop in the action department, but they were smart movies that really elevated the comic book genre a few notches. But not all films need to be like Marvel films, even if the character in question is a Marvel character.

I found that going into the review with low expectations and checking my brain at the door allowed me to enjoy Venom much more than I would have had I stopped and questioned everything along the way. Obviously, the film isn't perfect, but which ones are these days? I went along for the ride and found myself enjoying the movie much more than I thought I would for the whole two hours.

Granted, the second half of the film is easier to digest once Venom makes his appearance, but the work from Tom Hardy in the opening part of the movie shouldn't be discounted. I shudder to think what this movie would have been had he not been cast in the lead role. He is truly terrific in the dual roles of Eddie Brock and Venom.

Michelle Williams and Riz Ahmed provide stellar supporting roles as Eddie's fiancee and Venom's symbiote rival Riot respectively. I was early on the Riz Ahmed bandwagon and he continues to get better with each and every role that he takes on. While he doesn't add too much complexity to his villain role, he knows what his purpose is in the movie and he executes it to perfection.

This isn't the first time that we have Venom on the big screen. You might recall (or you may have cut that part of your memory out) that he appears onscreen in a major plot arc in Spider-Man 3. In that film, Topher Grace took on the twin mantles of Eddie Brock and Venom with very little backstory or exposition.

As a comics noob back in 2007, I was unfamiliar with the character and his inclusion left me more confused than anything. Sure, there were so many things wrong with Spider-Man 3 that it's hard to pinpoint one overarching failure more than another, but the limp Venom storyline was a major contributor to that film's demise.

So, I welcomed the opportunity to start fresh with the character and to actually learn about him organically. Sure, it might have felt like too much exposition for true comic book aficionados, but it truly helped the rest of us to connect with a very complicated character.

I had the privilege to review the 4K UHD version of Venom and I'm so glad that I did. The film comes with a Dolby Vision video track with HDR and a Dolby Atmos soundtrack. These are truly the best of the best when it comes to video and audio presentations and they did not disappoint.

As you might expect, the film is drenched in darkness early and often as the would be antihero is one that feels more at home at night. The HDR was able to handle the subtlety of the various black tones that brought the many shadows to life. Likewise, the Dolby Vision track had a chance to shine (literally) in the vivid colors of the occasional daylight scenes.

On the audio side of things, the Dolby Atmos track handled the effects-heavy action film with ease. The sound was both rich and vibrant and truly become almost a whole character onto itself. The movie looks and sounds wonderful and is clearly what you would expect from a 4K UHD offering.

Sony pulled out all of the stops when it came to loading up the home entertainment offerings with a smorgasbord of bonus features. There are standards such as deleted scenes and music videos, but Venom begins to separate itself from its peers with the many featurettes and something called "Venom Mode." When this mode is active, you get pop-ups that display during the film that highlight Easter eggs and comic book references that you might have missed.

As someone who still considers himself a newish comic book fan, the "Venom Mode" really helped to gain a greater appreciation for subtle things that I completely missed the first time through. The filmmakers also made a brilliant decision by including comics superfan Kevin Smith in the various featurettes. Not only is he knowledgeable about all things comics, but he brings a passion that is infectious and I know that he had me caring about She-Venom and I still have no clue if she's real or not.

At the end of the day, your level of enjoyment with Venom will depend on how you approach it. If you come in expecting an MCU-level comics book movie, you will most likely come away disappointed. However, if you leave your preconceptions at the door and simply sit back and let yourself enjoy the film, I think you will be among the 85% of us who appreciated Venom for what it is and not what it isn't.

Venom is now available on 4K UHD, Blu-ray and DVD.