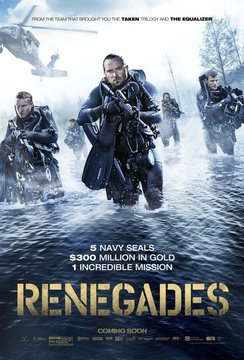 The wife and I are big fans of a little TV show called Blindspot. Actually, our enjoyment of the show mostly stems in its ability to put our kids to sleep in like 10 seconds. That and the surly performances weekly from series star Sullivan Stapleton.

We weren't very familiar with Sullivan before the show started, but we've become big fans since. He's got a knack for playing the wounded FBI agent/military type down pat and it was only a matter of time before he took his talents to the big screen.

Well, American Renegades is a direct-to-video film, so there's not really the big screen per se, but it's a step in the right direction. Sullivan Stapleton plays the commander of a SEAL team in Sarajevo that discovers a fortune in Nazi gold is hidden at the bottom of a lake. Naturally, the SEALs aspire to put their skills to good use and liberate the missing gold without being killed by the fighting around them in a crumbling, war-torn Bosnia.

Sullivan Stapleton is the main draw of the film and fans of Blindspot will be pleased to know that he delivers a strong performance. He just has one of those onscreen personas that screams a person in authority. As the SEAL team leader, he takes command and leads the action and occasional comic relief superbly.

The other bright spot of the film is the cameo from J.K. Simmons. As the commanding officer in charge of the SEAL team, he dispenses his own personal brand of discipline that is truly one of the high water marks of the film. Unfortunately, there's just not much more to it and the movie ends up wasting a decent storyline that had the potential to be a solid hit.

The story was co-written by Luc Besson and you would expect a compelling action plot from the guy behind Leon, The Professional, The Fifth Element and The Transporter films, but alas it was rather straight-forward and, dare I say, boring. It seems that his contribution was either small or he simply mailed it in on this one. That's unfortunate because we've seen compelling movies in this sub-genre such as Three Kings and this one falls way short of the mark set by that wonderful film.

I will relent that there was really awesome sequence in the film where they drive a tank off a bridge into the water below. I have never seen that before and it was a bright spot in an otherwise predictable plot. There are some good action scenes set underwater which are decent, but most action junkies will find lacking and more on par with made-for-TV movies.

Ultimately, your mileage may vary, but if you go in with very low expectations, then you will most likely enjoy American Renegades. The film isn't a complete wash and the 106-minute running time passes quickly. Unfortunately, there isn't really much that stands out and the movie is completely forgettable by the time you switch the channel.

American Renegades is now available on Blu-ray and DVD.