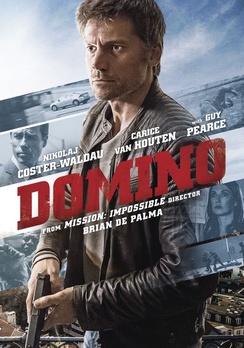 Brian De Palma is back with a new film from Brian De Palma. Did I mention that Brian De Palma directed Domino? Because I really should as it's probably the only reason that someone would pick up Domino on the shelf of their local video store.

What's that? Video stores don't exist anymore? That's rubbish, of course they do, you just have to look harder to find them. So to, do you have to look harder to see the brilliance of a Brian De Palma film. Back in the 1980s, you only had to look for De Palma's name to know that you were going to get an edgy suspense thriller with a certain cinematic flourish that can only be described as De Palma-esque.

As scarce as video stores are today, Brian De Palma films are even rarer. In fact, he has only released one other film in the last decade, the unfairly abused film Passion that I actually enjoyed and if you haven't seen it yet, I'd recommend that you seek it out.

Domino, whose title must inexplicably refer to the old adage of one piece knocking down the next piece and so on, follows a Copenhagen police officer who seeks justice for his partner who was murdered by an ISIS member. Unbeknownst to the detective though is that his suspect is on the CIA payroll and they are hoping to use him to take down a much bigger fish.

While this oversimplistic plot summary sounds interesting, the actual storylines in Domino are anything but. Brian De Palma has claimed that his version of the film was butchered by producers in postproduction and that the film has suffered as a result. I guess I'm not really doing a good job of selling the film, eh?

The fact of the matter is that Domino is not better than the sum of its parts, but, at times, its parts do hint at an interesting film that I really do wish we would have seen instead. So, I'm not sure if it was a weak script or if the producers did indeed sabotage of the greatest living film directors of all time, but the end result is a disjointed movie that really undermines its own success more often than not.

All of that said, for fear of burying the lede, Domino is still a Brian De Palma and as such, there's so much enjoyment to be had from his distinctive style. The film opens with a rooftop chase that will have you dreaming of Vertigo, but this sequence ends up being a high point of the film and one in which De Palma's trademark style is on full display.

The lead detective is played by Game of Thrones veteran Nikolaj Coster-Waldau and his mug on the box art will surely call out to those Game of Thrones completists who seemingly can't get enough of Jaime Lannister. While he gives an admirable performance in the protagonist role, he is overshadowed at times by both the slimy CIA agent Guy Pearce and ISIS patsy Eriq Ebouaney.

Pearce is phenomenal in everything that he's in and Domino is no exception. Even when hampered with one of the worst southern drawls ever put on film, Pearce finds a way to make it work and you end coming around to it by the end of the film. Meanwhile, Eriq Ebouaney continues a strong resume that began way back in 2002 with another Brian De Palma film Femme Fatale. It's clear that the director and actor bring out the best in each other and Domino is so much better because of it.

Sadly, another Game of Thrones actor Carice van Houten gets the short straw in character development. Perhaps her character was unjustly butchered by the cuts, but she's basically a cardboard cutout who joins Coster-Waldau on his mission of vengeance for her own selfish reasons. The actress is far too talented to be given such a throw-away role and I can only imagine that the original reading of her character had far much more to do than to simply be the token woman in an otherwise all-male chase film.

But again, the real attraction here is Brian De Palma and Domino features enough of his trademark slow-motion shots and split optics to satisfy the diehards. It also gives the film a much better sheen than it deserves and if you're new to De Palma, hopefully, you see enough here to seek out some of his earlier (and far superior) work.

Brian De Palma is a Hollywood legend and a new film from him is as rare as a unicorn. So, even if Domino isn't perfect, there is more than enough reason to see it simply to see the master work his magic once again. Unfortunately, the overall experience might leave you wanting more as the 89-minute film seems to drag on despite its tight running time.

Domino is now available on Blu-ray and DVD.