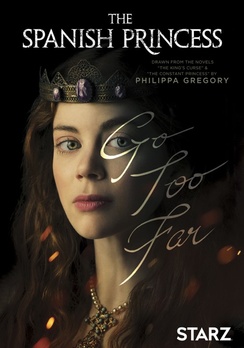 What is it that they say about the second films in trilogies? They are either great or terrible? The Empire Strikes Back and The Godfather Part II certainly lend credence to the idea that sequels can be better than the original film. Meanwhile, most second films such as The Matrix: Reloaded and Back To The Future, Part II are simply warning signs that the planned third film in a trilogy is a bad idea.

The Spanish Princess is the third mini-series of an ambitious planned trilogy of period-piece eye candy set to tell the English House of Tudor tale from a different perspective. The first mini-series, The White Queen, told the story of Elizabeth Woodville, Margaret Beaufort, and Anne Neville and their attempts to scheme their way onto the English throne. The White Princess, the second mini-series, captured the start of the House of Tudor with Henry VII from the perspective of his wife Elizabeth of York and their turbulent marriage which threatened to destroy the Tudor rule before it even started. The White Princess was well received so the outlook was pretty good for the third series.

Flash forward a few years and The Spanish Princess focuses on the strong-willed Princess of Spain Catherine of Aragon who sets sail for England for her promised throne. When her husband (and would-be king) Arthur dies unexpectedly her path to the throne seems to be quashed, but she quickly turns her sights the charismatic and headstrong Prince Harry, who will one day rule as King Henry VIII.

While I'm probably not necessarily the target demo for The Spanish Princess with its strong-female perspectives, I consider myself an enlightened man and I certainly enjoyed this different viewpoint on a well-known historical period. Quite frankly, the only mention Catherine of Arago usually gets in historical circles is typically her distinction of being the first of Henry VIII's six wives or as the mother of Bloody Mary.

Neither depiction is rather flattering and I, for one, was eager to dig a little deeper into this historical figure that helped to shape the world we currently live in. For the most part, The Spanish Princess comes out swinging thanks to a strong performance from Charlotte Hope as Catherine. It also presents a bit of enlightenment thanks to the role of Lina as a Spanish noble of African-Iberian descent that both attempts to tackle the issue of race and religion, thanks to her conversion to Christianity as a means of survival.

While race and religion are rarely mentioned in the story of Henry VIII other than naturally his reformation and many attempts to annul his marriage to Catherine and later to divorce the wives whose heads were not ceremoniously detached from their body. So, it was refreshing to see how the Muslim world was present and what sort of influence that it had in the Tudor reign.

With any sort of "bodice-ripping" fare, there is plenty of romance and intrigue that one would expect from the period and the genre, but again, the perspective is different. This series of titles places the point of view squarely from the female perspective that has been largely forgotten to the ravages of time and the chauvinistic demeanor of historians. While it's anyone's guess as to how close author Philippa Gregory got with the original novels upon which these TV properties are based, it is fair to say that her vision is much closer to the truth than any that we have seen to date.

At the end of the day, the period aspect will certainly draw that crowd and those looking for bodice-ripping won't be disappointed in the many times that Henry VIII is shirtless, but the really exciting aspect is the history. While history scholars might scoff at the revisionist history of these strong female figures, it only makes sense to deduce that women who revolved in the Tudor circles would be as fierce as their male counterparts, if not more so.

The Spanish Princess is both an entertaining piece of work as one that will hopefully challenge the male-centric view of history that prevails to this day. The mini-series is filled with many strong performances and one can only hope that this series will continue into the full-blown House of Tudor dramatic era.

The Spanish Princess is now available on DVD and Blu-ray.