Review: 'American Gods: Season 2' is a bit of a mess 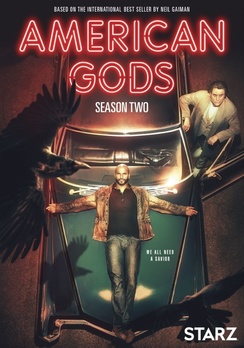 Like many fans of American Gods: Season 1, I'm conflicted. I'm a huge Neil Gaiman fan, but I'm equally impressed by the work of Bryan Fuller. In Season One, Fuller took Gaiman's source material and augmented it in a way that was both visually compelling in a modern world and philosophically meaningful.

As an avid fan of the book, I recognized that the showrunners had to update and adapt the novel to fit both in a visual medium and in today's ideologies. In my opinion, there was no one better fit to make these enhancements than Bryan Fuller.

Neil Gaiman respectfully disagreed. So, like two parents immersed in a bitter custody battle, Starz was forced to make a decision and they really had no choice but to side with Gaiman and Season 2 was made without Fuller. The results sort of speak for themselves.

Following the aftermath of Season 1, Mr. World plots revenge against the Old Gods while Mr. Wednesday and Shadow try to convince the Old Gods that their only option is to come together in some sort of Avengers-style team-up. As the sides become more defined and the tension builds, Shadow tries to carve out his place in this new reality of living Gods that rarely, if ever, get along.

My wife and I thoroughly enjoyed Season 1 and as we were both rabid fans of the book, we understood that a faithful interpretation of it wouldn't likely translate well. We were both awed and inspired by the places that Bryan Fuller took the series and was anxiously awaiting what he had in store for Season 2.

Sadly, we will never know what Fuller had up his sleeve for Season 2 and that is a shame. As it stands, American Gods: Season 2 is a lobotomized and neutered facsimile of Season 1. While it tries to make up for the vulgarity of Season 1 with a dizzying array of special effects, they come off as cheap and really cheapen the whole experience.

The brilliance of the first season was the character development of the Gods and their interplay in the history of the United States. It was this tension between the old Gods and the new Gods that drove the story both in Season 1 and the book. In Season 2, it seems that they are only interested in bringing some sort of Avengers-lite climactic battle.

I mean, sure, it worked on the big screen, but Marvel invested a decade and over 20 films of backstory to get to their ultimate payoff. The pacing of Season 2 just felt rushed without nary a pit stop here or there to give the viewer something to enjoy along the way. In Season 1, there were several dalliances that might not have directly moved the story forward, but they did add to the development of the characters and that was rewarded in the finale.

In Season 2, the thin storyline was completely realized by episode two and the rest of the season was little more than buildup for a battle that was if anything, a letdown. Even Emily Browning, who was a revelation in Season 1 as Shadow's reincarnated wife, is merely going through the motions. For all intents and purposes, she could have been played by a zombie and I don't think anyone would have noticed.

The lone bright spot for me in Season 2 was the performance turned in by Crispin Glover as Mr. World. He is the perfect antagonist and while I would enjoy watching him read the phone book, he really makes an effort to inject some life in this dying series.

Given the high profile departures from Season 1 and the fact that the new showrunner was basically sent home at the end of filming for Season 2, the prospects of a third season aren't looking good. This is a shame because I would have liked to see where Bryan Fuller could have taken the characters and what his ultimate resolution would have been.

American Gods: Season 2 is now available on DVD and Blu-ray.