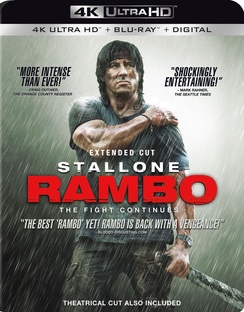 Rambo, AKA John Rambo, AKA Rambo IV: Pearl of the Cobra, AKA Rambo: To Hell and Back, AKA that Rambo movie that came out in 2008 is technically the fourth film in the franchise, no matter what you call it. You can understand the confusion as the second film in the series is also known as Rambo or to help better differentiate it from the others Rambo: First Blood, Part II.

The next film to be released was inexplicably Rambo III, so I've just given up. Anyhow, the third film in the franchise came out in 1988 and it figured to be the concluding chapter, but we should have known better. Once Sylvester Stallone was able to resuscitate life back into Rocky Balboa with the 2006 film by the same name, old Sly figured it was time to dig up his Vietnam War vet gone rogue antihero series.

The critical reception to Rambo in 2008 wasn't very kind. You could say that the reviews were mixed, and you could also say that Hindenburg experienced some turbulence on its final flight. But was the vitriol well-earned or simply a product of a character being resurrected in a world that had long passed him by?

This was the main question that I was trying to answer as I sat down to review the 4K UHD Blu-ray of Rambo that is being released to coincide with the release of Rambo: Last Blood in theaters later this month. Stallone was 62 when Rambo came out and he just turned 73, so will audiences swallow geriatric Rambo? Time will tell on what hopefully will truly be the "Last" installment of Rambo later this month, but I discovered some interesting things when I revisited 2008's Rambo.

The year is 2008 and John Rambo has been lying low in retirement for 20 years earning a living in northern Thailand as a snake catcher and longboat operator. He reluctantly agrees to transport a group of Christian missionaries into war-torn Burma but gets involved when they are captured by ruthless Nationalist Army soldiers. Now, Rambo is back and the body count adds up as he spearheads a rescue mission for the captured prisoners.

Here's a pop quiz, how many people did Rambo kill First Blood? Believe it or not, while the film mentions that he killed 59 people in Vietnam, he only killed a single person in the first film - and even that death is disputed as there wasn't confirmation that the person who fell from the helicopter truly died. By contrast, the titular hero kills a whopping 254 people in 2008's Rambo. No, I didn't count them all, I relied on Rambo Wiki for the stats. And honestly, it's close enough for government work.

The point is that with each iteration of John Rambo, his on-screen body count skyrockets. Given the trajectory established in the franchise, expect at least 500 people to meet their maker in Rambo: Last Blood. Hopefully, this film will buck the trend because I'm not sure anyone wants to sit through that carnage.

The fact of the matter is that the world has sort of passed by John Rambo. The good old days of escalating body counts of the 1980s are long gone and even by 2008's standards, the blood-letting in Rambo was a tad uncouth. Thankfully, Rambo: Last Blood appears to go in a completely different direction. I mean, I'm sure Rambo will still kill plenty of bad guys, but I think he'll safely keep it in double digits.

I wonder if he'll have machetes hidden in his walker?

All kidding aside, I was on the side of most critics in 2008 when Rambo came out. The film was little more than an exercise in bloody carnage with little to no regard to plot. Well, a decade later, the blood is still there and the dialog is just as terrible, but the new Dolby Vision transfer is amazing. The visuals really give you something to look at that sort of distracts you from all of the violence around you.

Given that I knew what I was getting myself into, I really took time in my revisit to enjoy the visuals and the lush jungle settings. The film is really visually stunning and that aspect is truly showcased with this new 4K UHD transfer. It's truly remarkable foresight as this film was shot over a decade ago, but the video transfer is as clean and impressive as anything shot today.

Another improvement is the included Dolby Atmos audio track. I always felt that action eye-candy such as simply trades loud and obnoxious for subtlety. If you listen to the original audio track, it really is just a wall of sound, but the Dolby Atmos track on the 4K UHD Blu-ray takes full advantage of the various channels to insert the audience into the action. Bullets zip by and explosions envelop you in every sense of the word.

Taken together, these enhancements are a clear siren call for the necessity of physical media and the ability to own films in their best possible light. No matter how much lipstick you try to apply to Rambo will never correct the horrible dialog that is even more anachronistic today than it was a decade ago if that's even possible. But, for fans of John Rambo and those looking forward to finally say goodbye to the antihero on the big screen, they will not be disappointed by the latest physical offering.

No, the 4K UHD doesn't magically make Rambo an Oscar-caliber film, but it does allow you to appreciate what the filmmakers were trying to achieve. As a bloody callback to a simpler time, Rambo has never looked better than it does this week. Check it out if you're going to see the latest film in theaters in a few weeks.