Review: The penultimate season of 'Supernatural' is superb 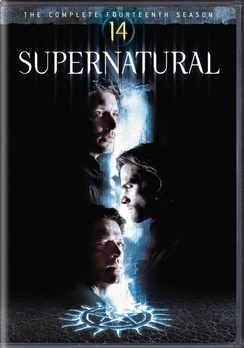 Back when Supernatural debuted in 2005 I was hooked from day one. The show had a certain X-Files meets Scooby-Doo mystique that immediately spoke to me.

Of course, had you told me back then that the show would be around 14 years later, I would have called you crazy. The fact of the matter is that shows these days don't enjoy the long hook from eons past. If a TV show isn't a hit within the first couple of episodes, our disposable attention spans simply move on to the next shiny new thing.

So, the fact that series stands on the precipice of its final 15th season while it releases Supernatural: The Complete Fourteenth Season is truly remarkable. Most marriages these days don't make it to the crystal anniversary, so the fact that series stars Jared Padalecki and Jensen Ackles have been able to make it work all these years is a testament to their work ethic and belief in a show with a ravenous fan base.

The general plot follows the Winchester brothers as they travel the countryside doing battle with all sorts of very real monsters, demons, ghosts, you name it. The series has traveled to Heaven and Hell and back again over the years, but Season 14 finds the boys fathering Jack, the son of Lucifer, and trying to save their mother.

The strongest thread through all fourteen seasons has been family and it's even more apparent in Season 14. The 300th episode of the series is included in this set and it's perhaps one of the best hours of the series to date. The entire series had been building to this moment and I wasn't shocked to learn shortly after watching it that the upcoming 15th season would be the show's last series.

Let's face it, the show is still good, but some of the B stories have gotten a bit far-fetched and really what more is there to tell at this point? The series sets up the ultimate season wonderfully in the season 14 finally and I'm pumped to get the final season started in a few weeks.

As an older brother myself, the exploits of the Winchesters have carried a particular fondness in my heart. Being 26 months apart, we grew up very competitive and while our family business didn't include hunting monsters, I feel like the Winchesters were a bit of an onscreen version of the relationship that I wish my brother and I would have.

That's not to say that my brother and I aren't close, but we've lived a few states apart for these past 25 years and that takes a toll on even the closest relationships. And yet, in some ways, we have actually grown closer. Without the constant competition and bickering, we have been able to appreciate each other's company so that our time together has actually improved.

Much like our onscreen avatars, it seems that while they both can survive apart, they make a much better team when they are together. In Season 14, they spend a lot of time with Jack and the Winchester's fatherly relationship with this son of Lucifer. In many ways, the show has come full circle from the early seasons where their Dad would often impart nuggets of wisdom that have popped up here and there throughout the series.

The season is really set up in two distinct parts. The first track leads up to episodes 13 "Lebanon" which is the show's 300th episode, while the other story arc deals with the fallout from that episode and really starts to set up the grand finale.

I'm not going to lie, I shed more than my fair share of tears during this episode. While it strayed away from the show's tried and true format, it was worth it for the visceral payoff at the end. Once the episode was over, I was ready for the last leg of this marathon.

As always, the Blu-ray combo packed is littered with a plethora of special features, but featurette on the 300th episode is one that you should not miss. The Winchester mythology is also really good, but the one on that special episode had me in tears all over again.

Given the end of the season, there are several paths that the show can take for the finish and it will be fun to follow along. It's anyone's guess where they will go, but it's a pretty good bet that the show's family, both blood and beyond, will be tested before it's all over. In the ultimate battle between good and evil, will the Winchesters survive? Or will they have to sacrifice themselves (again) to win the final battle? You'll have to tune in to find out.

Prepare for the final season by re-watching Season 14, now available on Blu-ray and DVD.