Review: 'Strange But True' is a character study in grief 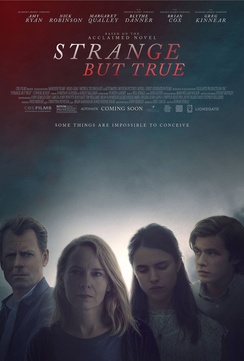 The premise of Strange But True is surprisingly simple, yet also so very complex. A woman has sex with her boyfriend on the night of prom and he is later killed in a car crash later that evening. Five years later, she shows up on the stoop of his parents' house pregnant claiming that their dead son is the father.

So, is it indeed a miracle, or is something more sinister at play?

That is the central thesis of Strange But True that is based on a best-selling book and in lesser hands, the film would have been a horrible B-list abomination that would be talked about for years for all the wrong reasons. As it stands, the stellar cast is able to take the material and weave it into something that is both thrilling and thought-provoking.

While you might read the blurb above or watch the trailer and immediately think that the film is some sort of faith-based miracle film, don't worry, that's not what you are getting here. I don't consider it to be much of spoiler to say that the ultimate resolution is more science-based and less immaculate conception.

Like any good film of its ilk, Strange But True is filled with a vast array of twists and turns that will keep you guessing until the end. I have to admit that I am pretty adept at figuring these out, but I was stymied several times along the way. Again, having such an impressive cast helped to shade the truth because there wasn't an overcasting that directly pointed to the answer. In that regard, the film clearly achieved its objective in keeping its secrets until the end.

Now, the ultimate resolution of those secrets is open to some debate and might be why the film is currently split with critics mostly panning it while normal audiences generally enjoying it. I tend to find myself in the latter camp on these such squabbles, but I can understand why critics were wanting more here, but ultimately I found the ending to be satisfying in a way that several such "twisty" films fail to accomplish.

If you haven't discovered the gem that is Margaret Qualley yet, where have you been the last several years? I first came upon her in the wonderful Nice Guys and she's continued to impress me ever since. You might recognize her as the face of Charles Manson's family from this summer's Once Upon a Time in Hollywood. Quentin Tarantino sure has an eye for talent and he is able to showcase her in a way that really allowed her to steal her scenes despite being opposite the likes of Brad Pitt.

Greg Kinnear's performance is another highlight from Strange But True and it desperately makes me wish that he would be in more films. He is at the top of his game here and the scenes between him and Amy Ryan are some of the most heart-breaking that I have witnessed in a long time. I can only imagine the pain of losing a child and I hope that I never experience it myself, but these two really convey the effusive suffering that surviving parents must go through.

Overall, Strange But True is a smaller picture that might not grab you from the video shelf, but it is definitely worth your investment. The performances lift the material and provide a dark look into the grieving process and the means to which a person will go to right a wrong.

Strange But True is now available on DVD and Blu-ray.