Review: 'Them That Follow' is a haunting dive into the deep South 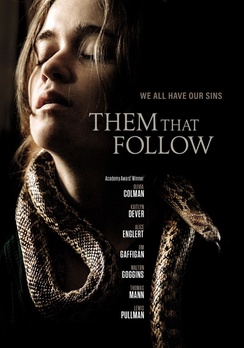 I have lived in Nashville, Tennessee for the last 20 years and while I will never truly be acclimated to all of the little nuances of the deep South, I have witnessed quite a bit. So much so, that I'm willing to believe the plot of Them That Follow, even if it sounds a bit far-fetched to most people from other parts of the country.

Just this last weekend, I was returning from Indianapolis and I decided to pull off of the interstate highway and take advantage of the winding backroads to showcase the beautiful turning foliage. While the drive was pleasant and offered many wonderful vistas, I was reminded just how little you have to travel off the beaten path to discover a world that is wholly unknown to most suburbanites.

If you stop in a backwoods restaurant or convenience store, you physically feel the weight of just how out of place you are. I wouldn't say that it reaches Deliverance-levels of apprehension, but it's clear that they don't want you there and you would feel a lot better to complete your transaction and carry on your way.

That's not to say that people who live out in these remote areas aren't friendly, quite the contrary, they relish their anonymity and would just rather keep their status quo without you in it. And yet, there is just something a bit off that rings true in every single movie that attempts to shed light into these isolated pockets of humanity.

Them That Follow follows the daughter of Pentecostal snake handler preacher who is devoted to her faith but finds herself questioning certain things as she prepares for her wedding. Isolated in the Appalachian mountains, the community is on the verge of exploding when a dangerous secret is unleashed.

For me, this film felt like a spiritual prequel to Kevin Smith's Red State which also dealt with similar themes of an isolated cultish religious community dealing with internal strife. While Red State focused more on the inevitable collapse of the society, Them That Follow lingers on the aspect of community and terror that leads people to be controlled, as it were, by charismatic leaders.

Whether it's the real-life Jim Jones and his kool-aid or Michael Parks in Red State, the key to the controlling people starts and ends with their leader. In Them That Follow, the always incredible Walton Goggins is tasked with being the one that binds them all together. Goggins is both spooky and inspired as Pastor Lemuel Childs and demonstrates the same strong arm of faith both in front of his flock and behind closed doors with his family.

Lemuel is not someone that you want to piss off and Goggins' strong performance is the catalyst for the story hitting on all cylinders. Without his mesmerizing performance, you wouldn't believe the fear in his daughter and the rapt attention that he commands from his flock.

The snakes are the loaded weapons of the story and just like Chekhov's gun, you know from the first scene that someone is going to be bitten. This inevitability helps to heighten the suspense, but they also serve a more direct purpose. Pentecostal snake handlers aren't just people that Hollywood made up, they do exist and I have met several. They are absolute in their beliefs about the snakes being a symbol of sin and the devil and the healing power of your faith. And yes, they knew people who had succumbed to snake venom.

We sometimes forget in today's modern world where people are literally a text message away or a short plane ride that not everyone chooses to engage in the technological world that most of us live in. Whether it's the Amish community or Pentecostal parishes, there are pockets of people living in these United States that might surprise you. As someone who has lived in the deep South for over two decades, nothing really surprises me anymore and I found a lot of truth in Them That Follow.

I should also point out before I wrap this up that I was genuinely impressed with the filmmaking from these two first-time directors. They composed shots in such a way that it really increased a level of claustrophobia that resonated with the audiences. Not only were the characters trapped by the tyrannical fist of Pastor Childs and his snakes, but so too were we forced to remain under his power until the credits rolled.

Them That Follow is a quaint slice of Americana that Hollywood occasionally likes to highlight. There were several inspiring performances that helped to carry the story through the slow spots and the tension really came to a head at the climax to provide a chilling tale of what most likely goes on in small rural towns along the Bible belt every day.