Review: Schwarzenegger brings the heat to 'Red Heat' on 4K 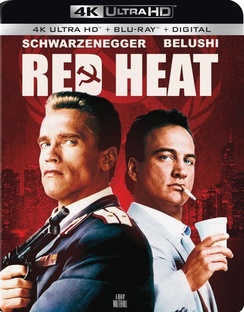 Was there a bigger movie star on the planet in the late 1980s and early '90s than Arnold Schwarzenegger? The answer is no. No, there was no one even close. If you were born around this time, it would be hard to find a contemporary comparison, but if you combined Chris Hemsworth, Bradley Cooper and The Rock, you'd get close.

This was the period between the first two Terminator films and movie studios were crawling all over themselves to figure out how to Arnie into their films. He was familiar to action and science fiction audiences, but why pigeon-hole a bonafide star? So, thus began his odd comedy film career. One of the first films of this period was Red Heat which was a pretty much a by-the-numbers buddy cop movie with a big fish-out-of-water feel to it.

Released in 1988, Red Heat performed admirably at the box office, but it would be Arnold's next comedy film, Twins released later that year, that would be Arnie's big break in the comedy world. So, it had been a hot minute since I have seen Red Heat, but I was looking forward to seeing how it's progressive Cold War storyline would hold up against the test of time.

Arnold Schwarzenegger is a Russian cop whose partnered is murdered by a Georgian drug kingpin. The kingpin takes refuge in America and Arnold's bosses send him over the pond to extradite the killer back from Chicago. Once in the Windy City, Schwarzenegger teams up with a Chicago cop played by Jim Belushi and they must overcome their forced glasnost to bring the fugitive to justice,

So, how did the film hold up? As you would expect, there are several anachronisms that stick out like a sore thumb. There are several jokes that were more appropriate during the height of the Cold War, but they have lost their zing as relations between our two countries have thawed.

In many ways, it's the same sort of nostalgia loss that happens when you go back and watch films like Red Dawn and Rocky IV. If you lived through these periods or studied them in school, then you have a greater appreciation of the films over those who wouldn't know the Berlin Wall if they walked into it.

The re-watch did highlight some of the glaring plot issues that I had gleaned over when I was a kid. The truth of the matter is that the screenplay was pretty weak and a blatant cash grab attempt by director Walter Hill to capitalize on Arnold's heat (no pun intended) and his earlier, much more successful buddy cop film 48 Hrs.

That's not to say that Red Heat doesn't have its moments because it certainly delivers enough goods to make it worth a watch. In particular, the criminally underrated Jim Belushi is excellent in the film and his delivery perfectly blends in with Schwarzenegger far more wooden performance. It's painfully obvious that Arnie is still earning his comedy chops, but he's a willing participant even if the material is a bit beneath him.

The 4K UHD video transfer is native from the original film and as such it retains a certain amount of grain and patina that you would expect from a film over 30 years old. The Dolby Vision process does clean up the many dark scenes in the film. In particular, the culminating bus chase sequence looks amazing and the 4K version really gives this climax the visuals that it deserves.

On the audio front, it is a bit disappointing to see that they simply marched out the same 5.1 mix that they used for the Blu-ray. There are several action sequences and shootout scenes that would have benefited from a new Dolby Atmos soundtrack. The audio is good, but I just wished they would have refined it a bit as it does tend to be noticeably subpar to other 4K UHD releases.

The bonus features are another area of disappointment as this packaged simply regurgitates the previously available extras from the Blu-ray release. The good news is that if you're a completist, you can let go of the Blu-ray when you upgrade to the 4K UHD without worry that you would lose access to your favorite bonus features. I was just hoping that there would have at least been a 30th Anniversary feature where the principals reunite to reminisce about this film and its impact on other films to follow it.

In particular, the most obvious homage to this formula was the Rush Hour films that would find their way to cinemas in the late 1990s. The times had changed by then and China had replaced Russia as the obvious example of disparity to the United States.

Overall, it was fun to stroll back to an earlier time and look at a film that I truly enjoyed as a child, but it's obvious that Red Heat has lost something over the years. It looks great on 4K UHD and if you're a collector or simply like to be tortured by early Arnold Schwarzenegger accent work, then you'll want to own this on 4K.