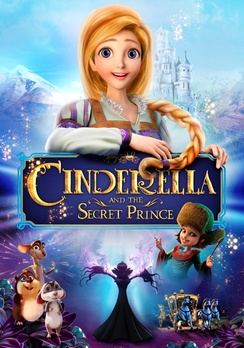 While it might seem like Disney has a stranglehold on classic fairy tales or anything written by the Brothers Grimm, the reality is that these stories are very much in the public domain and open to interpretation by anyone willing to take a shot. This week, Shout! Factory Kids brings us a delightfully alternative take on the Cinderella story with Cinderella and the Secret Prince.

Of course, there's a reason why Disney is seen as the gold standard of fairy tales and that's mainly because they have established a certain high level of entertainment that audiences have come to expect from all of their properties. To say that the quality varies with these other studios is an understatement. Sometimes a studio will put in the effort and truly create something magical, mostly though, their take is simply an inferior copy of something better.

I'm happy to report that Cinderella and the Secret Prince is more like the former than the latter and strives to create a unique spin on the timeless tale.

Ella and her three mouse friends embark on a journey to the Royal Ball at the palace, but all isn't as it seems when they learn that there's an imposter Prince and the real Prince has been turned into a mouse. Now, Ella and her friends must set off on a new adventure to vanquish the forces of darkness and restore the real Prince to his true form.

As an adult, I'm clearly not the targeted audience of this movie, but thankfully I have two children under the age of eight who are the perfect age to give their opinion on Cinderella and the Secret Prince. My best review of their enjoyment of the film is simply the fact that once it was over, they were begging me to watch it again.

As children, they weren't obsessed with the technical merit of the animation or the feasibility of the storyline. They were simply entertained and they wanted more of it. They thought the three mice were particularly enjoyable and my daughter loved seeing a Cinderella (really Ella) that was more of a "butt-kicker" in her words.

The sad fact of the matter is that while the original Cinderella story is enjoyable, it is a bit of patriarchal mess where the young girl is selected by the all-knowing Prince as his chosen one. There really isn't much of a role model there for young girls such as my daughter. This could explain why Disney is leaning more heavily into strong female-led films such as Frozen.

Cinderella and the Secret Prince turns the entire story on its ear by presenting its protagonist as a strong woman who is willing to save the Prince and not the other way around. In many ways, the aims of the film were admirable even if the execution was somewhat lacking.

Sorry, this is the part of the review where I have to step in as a reasonable adult and at least chime in with a few of my criticisms. At first, I was sure this film was a foreign film simply dubbed in English because the mouths never seemingly aligned with the dialog. It was really the animated equivalent of bad Kung Fu dubs from back in the day.

But alas no, the film was indeed made for an English-speaking audience, but the animation house was just sloppy or rushed and you can see other artifacts throughout the film that sort of lend credence to that theory.

Also, the storyline, while unique and refreshing, seemed to be put together in a roughshod way that didn't make much sense. We really aren't given much insight into the major plot points and to say that the film was resolved inadequately would be generous at best. The ending was abrupt and didn't really make much sense. It required a lot of effort on the audience to figure out how things transpired and your average child probably can't do it.

Of course, all of that doesn't really matter to the average kid. As I said, my kids loved it and when I quizzed them about certain inconsistencies that I noticed, I got a couple of shoulder shrugs. They just didn't care and neither should I.

Cinderella and the Secret Prince is now available on DVD.