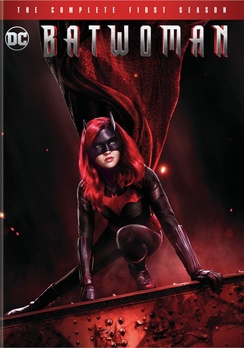 Warner Bros. Home Entertainment provided me with a free copy of the Blu-ray I reviewed in this news story. The opinions I share are my own.

The CW has created quite the formidable lineup of DC properties over the years under the "Arrowverse" banner and Batwoman is just the latest entry in the stable. The Arrowverse has cultivated a reputation for edgy and dark storylines over the years, but nothing has pushed the envelope as much as Batwoman.

And that's precisely what makes the new series so exciting and relevant.

Kate Kane is an outcast who has been shipped out of Gotham under the guise of military training, but when her ex-girlfriend Sophie is taken hostage she returns to the infamous city of crime to save her. With her cousin Bruce Wayne, aka Batman, missing for three years, Kate realizes that Gotham needs a new vigilante hero now, more than ever.

As someone who hasn't taken a deep dive into the DC universe, I am precisely the perfect test case for The CW. I do enjoy a well-put-together TV series and I've been a fan of the Arrowverse for some time. They not only tell remarkably compelling stories, but they also feature big-screen level action and stunts that continue to set the bar for TV fare.

And it's the one area where DC is getting the upper hand on Marvel. We know that when it comes to the cinematic universe, Marvel is king while DC can't figure out what it wants to be. One the one hand they have films that are phenomenal such as Joker, while on the other hand there's Green Lantern.

I don't bring up Green Lantern randomly. It was written and produced by none other than Greg Berlanti. He is to the Arrowverse as Kevin Feige is to the Marvel MCU and yet, he's not perfect. But even with Green Lantern, we could see Berlanti's passion for the stories that would come to define a decade of superhero TV and beyond.

Berlanti has done it again with Batwoman while breaking new ground. He hasn't shied away from controversial subjects and he's included same-sex relationships in other series such as Supergirl, but this is the first time that it has taken a direct front seat.

There's no getting around the subject as the modern incarnation of Batwoman has been a lesbian since she came out of the bat cave in 2006. So, when Ruby Rose was cast in the lead role in the series, there was no question as to how Berlanti and company would handle Kate Kane's sexuality.

They certainly didn't try to hide or mask her sexual preference either as it is front and center in the first several episodes and throughout the season. And yet, Batwoman's sex like doesn't define her as a superhero as it shouldn't. The takeaway from the series is that Batwoman is as capable a vigilante hero as her more famous cousin.

Another noticeable departure from the usual comic book trope is the diverse cast. Over the years, the superhero genre has come under fire for favoring a caucasian cast over a more representative cast. If anything, the success of the musical Hamilton proves that audiences are more than willing to accept superheroes in all shades and varieties.

As for the story arcs of the first season, the show runners wisely chose the Alice and her Wonderland gang for the introduction of Batwoman's rogue gallery. Not only is the story compelling, but it's a personal story for Kate Kane and is one that resonates well with audiences. While there are stand alone stories and other rogues, they don't stray too far from Alice in this first season and that's a good thing.

Rachel Skarsten is an actress who was new to me, but she was perfectly cast as Alice and I'm only hoping that the off-season developments don't jeopardize her future with the show. Her portrayal of Alice is equal parts of Margot Robbie's Harley Quinn and Heath Ledger's Joker and her swings are violent and sudden.

The show's future is the real elephant in the room. The show was picked up for a second season back in January and then COVID happened. Lead Ruby Rose took the time to reconsider her participation and she left the show. Suddenly the CW was looking for a new Batwoman in the midst of a pandemic.

African-American actress Javicia Leslie was named Rose's replacement behind the cowl and suddenly the show that broke new ground is ready to go even further with this casting. While I'm not overly familiar with Javicia's work, she will have a big bat cape to fill because Ruby was almost tailor-made for the part.

On the one hand, a faceless superhero is rather easy to recast in the sense that comic book arcs are famous for having others take up the costume in times of distress. But on the other, it's not typical for a new series to lose its lead between season one and two. Of course, the continued COVID pandemic has given the show runners additional time to fully flesh out the sudden curveball.

No matter what happens, I'm hooked. I look forward to see where they take us in season two and beyond. And like any good comic book worth its salt, I'm willing to bet that we haven't seen the last of Kate Kane in Gotham.

Batwoman is now available on Blu-ray and DVD.